An Atheist Member of the Arizona House of Representatives Delivered a Godless Invocation Today May 21, 2013 Hemant Mehta

Juan Mendez, a 28-year-old Democratic State Representative from Tempe, Arizona, got elected this past November. Somehow, this bit of information on his Facebook page slipped under our community’s collective radar: 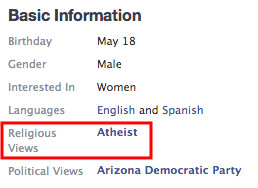 But if his atheism wasn’t publicly known before, it is now. Earlier today, Mendez did something we’ve rarely seen from any elected official in any state: He delivered an invocation before the House began its afternoon session in which he honored his Secular Humanism:

This is a room in which there are many challenging debates, many moments of tension, of ideological division, of frustration. But this is also a room where, as my Secular Humanist tradition stresses, by the very fact of being human, we have much more in common than we have differences. We share the same spectrum of potential for care, for compassion, for fear, for joy, for love…

Carl Sagan once wrote, “For small creatures such as we, the vastness is bearable only through love.” There is, in the political process, much to bear. In this room, let us cherish and celebrate our shared humanness, our shared capacity for reason and compassion, our shared love for the people of our state, for our Constitution, for our democracy — and let us root our policymaking process in these values that are relevant to all Arizonans regardless of religious belief or nonbelief. In gratitude and in love, in reason and in compassion, let us work together for a better Arizona.

So how did all this happen?

The Phoenix New Times doesn’t go into much detail, but it’s no coincidence that members of the Secular Coalition for Arizona were in the gallery today.

A couple of weeks ago, the SC Arizona’s Executive Director Seráh Blain set up a meeting with him to talk about her group’s issues and get his take on them. That’s nothing unusual. But when Blain saw that he was an atheist on his Facebook profile, she asked him about it and they ended up discussing the state’s vibrant secular community (in addition to the other issues) and planned to stay in touch.

Cut to last week. Mendez was scheduled to deliver the opening prayer in the House — all members are expected to do it at some point — and he asked Blain for advice on what to do. Should he decline the opportunity? No, she told him, adding that he should use his time to challenge religious privilege by showing that atheists, too, have “beautiful, powerful beliefs and convictions.”

So Mendez gave the invocation. And he even acknowledged the SC Arizona’s presence in the gallery. That may not have even been the highlight of the event. According to Blain:

When we all said the Pledge of Allegiance, there was poignant silence on the word “God” in the gallery. One nation, indivisible. Amazing.

Just to top it off, a press release from SC Arizona included this wonderful comment from a former leader of the Arizona House:

Former House Democratic Leader Phil Lopes added, “As a Humanist I am delighted that a secular message opened today’s House session. The challenges our state faces can only be solved if we welcome and encourage the ideas and views of all Arizonans. We do ourselves a disservice if we continue to exclude or ignore the concerns and interests of 20 percent of the population.”

Video of Mendez’s speech will hopefully be available tomorrow.

Incidentally, this is the same state House that Kyrsten Sinema (who is believed to be an atheist though she no longer talks about it publicly) was in for six years before being elected to the state senate and (now) the U.S. House of Representatives. The New Times points out that “many of Mendez’s constituents also call Sinema their Congresswoman.”

After the invocation, Mendez called himself one of just one of 1.3 million Arizonans not affiliated with a religious tradition or organization.

“I hope today marks the beginning of a new era in which Arizona’s non believers can feel as welcome and valued here as believers,” he said.

(Thanks to Zachary for the link!)

May 21, 2013
Asked by Wolf Blitzer if She Thanked God for Surviving the Tornado, Oklahoma Woman Responds: 'I'm Actually An Atheist'
Next Post