Atheist Literature Is About to Be Distributed in Georgia State Parks May 18, 2013 Hemant Mehta

Atheist Literature Is About to Be Distributed in Georgia State Parks

It’s one thing to find a Bible in your hotel room since hotels are privately-owned businesses.

But why would there be one in a rented cabin at a state park? 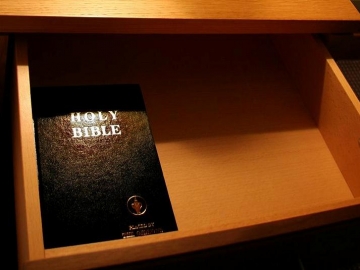 That’s what Ed Buckner, the former American Atheists president, wanted to know after finding one at Amicalola Falls State Park in Georgia. It’s not that he was offended so much as he didn’t see how it was legal for a Christian book to be offered in a taxpayer-funded place.

“I think government entanglement with religion is a very dangerous thing,” he said in a telephone interview Thursday. “When you go into a state park cabin and the only piece of religious literature there is a Protestant Bible, that suggests the government’s endorsed that particular perspective.”

Initially, officials removed the Bibles from all the state parks — angering many Christians in the process — but this week, Governor Nathan Deal ordered those Bibles back into the rooms because he argued they were perfectly legal:

“These Bibles are donated by outside groups, not paid for by the state, and I do not believe that a Bible in a bedside table drawer constitutes a state establishment of religion,” he said. “In fact, any group is free to donate literature.”

Well, we can take issue with whether the fact that they were donated makes them legal… but did the Governor just say any group can donate literature that would appear in state-owned cabins?

Fantastic. American Atheists is on it:

“We appreciate the governor’s invitation to place atheist books in the cabins and look forward to providing visitors with the opportunity to learn more about atheism when they visit Georgia’s beautiful state parks,” said Managing Director Amanda Knief.

“American Atheists does not believe the State of Georgia should be placing Bibles or atheist books in state park cabins; however, if the state is going to allow such distribution, we will happily provide our materials,” said President David Silverman.

Books to be donated include “Why I Am Not A Muslim,” by Ibn Warraq, “Why I Am An Atheist” by Madalyn Murray O’Hair, “god is not Great,” by Christopher Hitchens, and “The God Delusion” by Richard Dawkins.

What’s Deal going to do now? Either he has to allow the distribution of atheist books in state parks, remove all religious and non-religious books from them, or brace himself for a lawsuit.

Either way, Ed did the right thing by alerting officials to this promotion of Christianity and the Governor just stuck his foot in his mouth by trying to pretend like this wasn’t Christian privilege in action.

May 17, 2013
Camp Quest Kansas City Is Ready for Action
Next Post

May 18, 2013 These Christian Kids Think They're Being Persecuted... Now Watch Them Get Called Out On It
Browse Our Archives
What Are Your Thoughts?leave a comment