The Young Women Who Are Speaking Out Against the Mandatory Christian Assembly at Their Public High School May 16, 2013 Hemant Mehta

***Update***: I have removed the name of one of the students at her request.

On April 9, students at Northwest Rankin High School in Mississippi attended a mandatory assembly featuring representatives from nearby Pinelake Baptist Church. The performers told the students how they needed to accept Jesus in their lives. They even showed a video:

In the video, two young men were interviewed who had once led “troubled” lives. To find hope, the men described various behaviors such as turning to drugs, sex, cutting, suicide, and the like. They then explained how turning to Jesus Christ solved their problems and recommended that other people turn to Jesus Christ as well.

According to the American Humanist Association, even when students tried to leave the Performing Arts Building so they wouldn’t have to listen to the preaching, they “were harassed by a principal and told to sit down.”

The Appignani Humanist Legal Center of the AHA sent the school a complaint letter (PDF). After not hearing back from the administration, they filed a lawsuit (PDF) against the school, in which the extensive and jaw-dropping details about the assembly are listed in full.

Or you can just watch a portion of the assembly here:

To be clear: There’s absolutely nothing legal about any of this. The school cannot force students to sit through a Christian sermon, even if other students are presenting the material.

Yet, no one would have known any of this was happening without the help of two brave students. 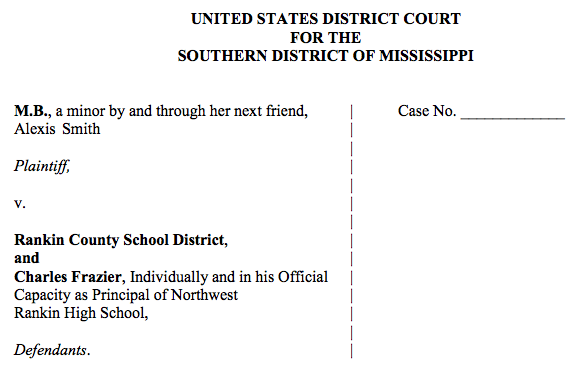 You can see in the lawsuit that the plaintiffs are M.B. and her friend.

Until now, the news reports about the case have not said much about who they are and why they did this.

But now they’re telling their side of the story.

In a piece for Humanist Network News, M.B. — Magdalene Bedi, who goes by “Gracie” — talks about why she took action:

I abandon anonymity not to call attention to myself, but rather to call attention to the case and better validate its purpose. As a student at the high school, I have been privy to the thoughts and analysis of my peers, and what I’ve heard has been incredibly disheartening. Rather than reviewing the case objectively, I have been written off as an angry atheist, a scorned student, and even as a greedy child looking only for profit. Allow me to defend myself against such harsh conclusions.

I am not a scorned student. Northwest has been nothing but kind to me throughout my several years of public education, and I may attribute my depth of awareness to the very thorough and efficient curriculum. The faculty is perhaps the best in the state and may be among the best at the national level. It is not my intention to rebel against or insult the high school itself. My grievances are only with the inappropriate and unconstitutional actions by the administration and staff.

Can you believe she’s only a high school junior? How amazing that she’s breaking out of the shell of anonymity despite the pressure that must be against her right now. I’m glad she’s doing it; she deserves to be known for the stand she’s taking.

A couple of nights ago, I spoke with one of the students involved. Because Gracie is a minor, she has been the named plaintiff in this lawsuit. A senior who graduated early, she’s been an open atheist even since middle school. Her secular friends came to her after the assembly because they figured she would know what to do. When the prospect of a lawsuit was brought up, Gracie was the only student willing to be a part of it.

This is an even bolder move when you consider her own parents are unaware of what’s happening right now because they’re out of the country. In fact, her parents are very religious — her father was a church deacon and her mother taught Sunday School.

I asked her what she plans to do in the future and her response was “I really wanted to go into politics, but I think I threw that career out the window.” I hope that’s not the case, but church/state separation hasn’t always been a winning issue in Mississippi.

What does she hope happens as a result of AHA’s intervention in this case?

I hope the school stops the close relationship between it and the church. Also that religious events such as these assemblies won’t happen again for future generations, at least not during school hours. And that people will be more open-minded about secularists and nonbelievers and understand that they are around, just not open about it.

Amazing women, both of them. They have their work cut out for them in the court of public opinion, but by standing together in this, they’re helping each other out. The school has yet to respond to the lawsuit. But it’s hard to see how anyone could oppose Gracie and the other student — they’re not anti-Christian haters hell-bent on ruining the school’s name. They’re law-abiding students who want their school to be respectful of all students and not just the Christian ones.

May 16, 2013
High School Principal Encourages Christian Teachers to Teach Creationism and Proselytize to Students
Next Post

May 16, 2013 Caught Spreading a False Story, Christian Writer Tries and Fails to Cover Up His Mistake
Browse Our Archives
What Are Your Thoughts?leave a comment