Caught Spreading a False Story, Christian Writer Tries and Fails to Cover Up His Mistake May 16, 2013 Hemant Mehta

Caught Spreading a False Story, Christian Writer Tries and Fails to Cover Up His Mistake

Earlier this month, I posted about Columbus High School athlete Derrick Hayes. Hayes ran the anchor leg of his track team’s 4 x 100-meter relay and they had qualified for the state tournament… until he made a special gesture: 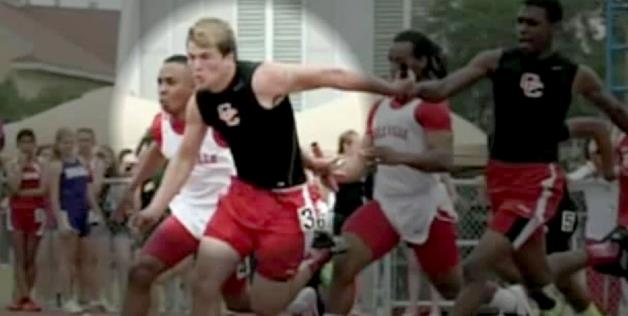 As Hayes crossed the finish line in first, he “put his hand by his ear and just pointed to the heavens,” Hayes’ father said.

Officials ruled that the gesture violated a state scholastic rule against excessive celebration, which includes raising one’s hands. The team was disqualified, and barred from competing at the state championships.

Long story short, Christians were quick to call this religious discrimination… until Hayes and his family admitted religion had nothing to do with it:

“In looking back at the conclusion of the 4×100 race, we realize that Derrick could have handled the win in a different manner,” KC and Stacey Hayes said in the letter. “It was not our intention to force the issue that our son’s religious freedom was violated. Nor do we feel that way now. After discussing this with our son, we have come to the conclusion that his religious rights were not violated.”

So that’s that, right? Derrick learned a lesson the hard way. The refs did what they were supposed to do. Let’s move on.

Enter Dr. Jerry Newcombe. Writing for Truth in Action Ministries a week after all of this transpired, Newcombe didn’t get the memo that this wasn’t religious discrimination:

What did he do? What was his crime? After a successful run, as one of four runners (100 meters each in a relay), he pointed his finger to the sky—in a gesture of thanksgiving to God.

This one gesture now disqualifies his team because it was supposedly an “excessive celebration”—which is not allowed.

His father was dumbfounded, according to Alexander Marlow of Breitbart News (May 3, 2103): “It was a reaction,” said the father, “You’re brought up your whole life that God gives you good things, you’re blessed.”

It dawned on me that if that young man had given an obscene gesture to his team’s opponents, and he were likewise punished, the ACLU would have been at that young man’s defense faster than he had run the 100-meters.

Why is it that any sort of Christian expression in the public arena is not allowed, but virtually every other expression is allowed?

I’m going to ignore the totally ignorant statement about the ACLU for a second. Let’s give Newcombe the benefit of the doubt and assume he just missed the follow-up story about Hayes.

The proper thing to do would be to point out the mistake and apologize, or issue a correction right on that post, or write a new post explaining what went wrong.

But as we all know, we can’t assume Christians will do the right thing when the opportunity presents itself.

Here’s what Newcombe did:

He changed the entire post thinking no one would notice. He didn’t apologize. He didn’t issue a correction. He didn’t even tell anyone what he did.

Kountze, Texas has a population of 2,123 according to the 2010 census. The high school cheerleaders in this small town in the eastern part of the state have had the custom of writing encouraging Bible verses on the banners the players would run through.

But the Freedom From Religion Foundation (based in Wisconsin) complained and threatened to sue, so last fall the superintendent stopped the practice. But with the help of Liberty Institute, the cheerleaders won a victory in court to resume the practice. The legal group noted, “Liberty Institute is proud of these young women for taking a bold stand.”

Stepping back, let me ask a question in this case: Where’s the church? Where’s the state?

Why is it that any sort of Christian expression in the public arena is not allowed, but virtually every other expression is allowed?

First of all, that doesn’t even make any sense, since the Christian expression in this case was allowed. Newcombe just committed a “cdesign proponentsists“-like error.

But more importantly, how did Newcombe think no one would notice?! Has he not heard of Google Cache?! Because I have. And the original article can be found right here (PDF). (You’re welcome.)

According to Wonkette, which first caught this lie:

We think there may be some old adage about a Lie for Jesus making all the way around a hundred meter track and into wingnut media before the truth gets its track shoes tied, but we don’t really recall.

So when is Truth in Action Ministries going to change its name? It obviously doesn’t apply.

May 16, 2013
The Young Women Who Are Speaking Out Against the Mandatory Christian Assembly at Their Public High School
Next Post