Yesterday, the city of North Miami, Florida held elections for Mayor. The election was notable for the rest of us because candidate Anna L. Pierre claimed she was endorsed by Jesus Christ: 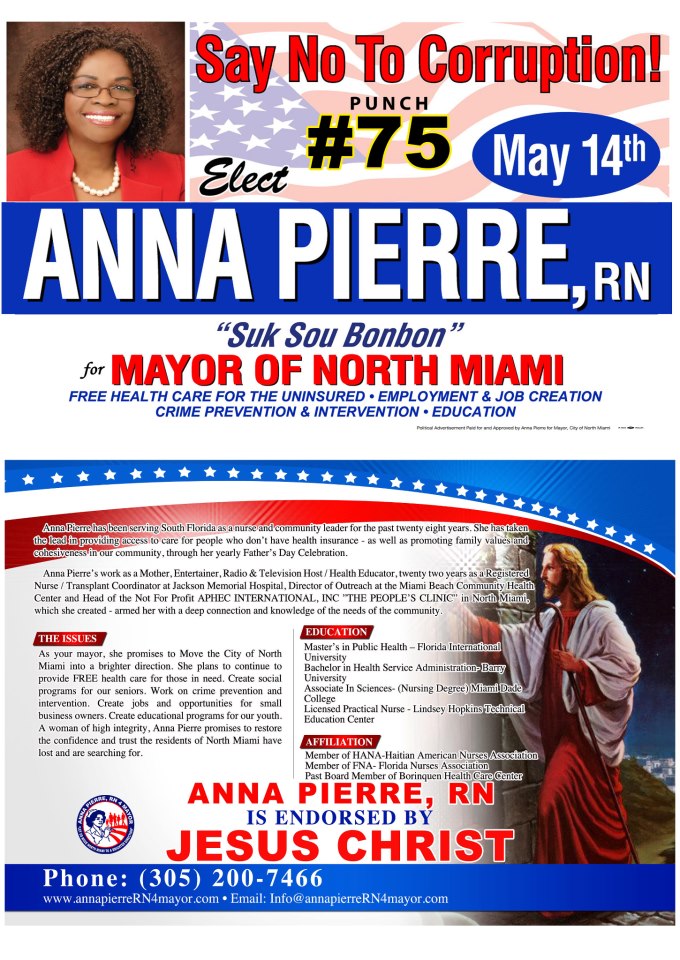 It turns out Pierre didn’t fare so well:

Anna Pierre, a registered nurse who claimed she was being endorsed by Jesus Christ, finished last among the seven candidates with 56 votes, or just 0.83 percent.

“Yes, Jesus endorsed me!” Pierre said during a stop at the Gwen Margolis Community Center Tuesday morning as the polls opened. “I’m not nuts, if I’m a freak and nuts for Jesus, let it be! Let the world know that Jesus is it and when you have Jesus on your side you can go on.”

She got less than 1% of the vote! Though I guess if you have to say, “I’m not nuts,” that probably doesn’t bode well for your campaign… it’s like Christine O’Donnell saying, “I’m not a witch.”

Here’s the bigger question: If an openly atheist candidate ran against her, would s/he have done better or worse?

On a side note, one news outlet found voters who didn’t think Pierre was nuts. That’s because they’re even nuttier:

“Well, I thought ‘I wonder if I ought to vote for this person to maintain the cosmic balance,'” Grover Rawlings said. “I mean, I want to stay on the good side, it’s a pretty powerful endorsement if it’s true.”

Others took the self-proclaimed revelation sincerely.

“Well, like I said, I’m Christian and if she believes it, I’ve never heard it before, but you know, she could’ve been,” Ann Simpson said.

(Thanks to Martin for the link!)

May 15, 2013
After Seeing Painting of Hindu Deity, Virginia County Officials Decide to Hang Ten Commandments in Government Building
Next Post