To learn more about this series please click here and here then here. 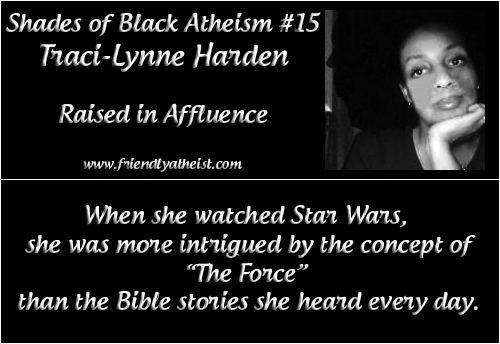 Born and raised in Atlanta, Georgia, Traci-Lynne Harden grew up in the affluent black community of Cascade Heights in southwest Atlanta. Her parents and family were educators and business owners. As a baby, Traci-Lynne was baptized in the Roman Catholic Church and attended a Catholic school until she was in eighth grade at which point her parents allowed her to attend a magnet high school.

Traci-Lynne had the full Catholic experience receiving First Communion as a first grader and getting confirmed when she was thirteen. She stated that she “tried very hard to believe in the narrative they repeatedly told me. I felt so much anxiety and fear over the fact that I never could quite get to the level of acceptance that others seemed to achieve so easily.” She vividly remembers having “epithetic moments” when she watched Star Wars. She was more intrigued by the concept of “The Force” than the Bible stories she heard every day. In addition to this she was obsessed with art and science and especially black holes, a regions of space-time from which gravity prevents anything, including light, from escaping. This subject matter never even came up in her catechism classes.

Traci-Lynne has fond memories of her childhood. Although she grew up in an affluent area and had a good education, she was not blind to “all the ‘rules’ surrounding black culture in general, and [found] the black middle class in particular constricting and very limited.” This included the rules about religiosity. As an undergraduate at Spelman College, she found herself only going to church to keep her parents happy and to have contact with her friends. The church is very often the black community’s social hub. Although she hadn’t “embraced the idea of atheism,” she didn’t believe the ancient ramblings she heard each week in church. Eventually, the consequences were more than she could deal with and she went on what she referred to as “spiritual auto-pilot.” During her junior year, she took a comparative philosophy course which turned out to be a game-changer for her. It wasn’t all fun after that. She went from anxiety and fear to anger. She felt as if she had been willfully lied to. She stopped attending the Catholic Youth Association meetings and considered her Catholic Mass attendance a requirement of living in her parents’ house.

Traci-Lynne’s immediate family knows that she is an atheist but many others in her extended family don’t know. Still, she has to deal with their attempts to proselytize and “fix” her. Married for 19 years, her husband is also a freethinker. He’s also black and was raised in the Missionary Baptist Church. “In college he really enjoyed reading about other world religions (Islam, Hindu, Judaism, Taoism, etc). Our discussions over the years seem[ed] to lead us to a simultaneous path to freethought. We raise our two children (16 and 10) to be critical thinkers and question authority.”

When asked if she thought the black atheist experience might be different from that of non-blacks, she stated:

…[It is] both similar to others’ journeys as well as very different. It is similar to those other freethinkers living in the U.S., where the majority of people describe themselves as Christians and/or theists. It’s quite difficult to be an atheist when the word “atheist” conveys so many misconceptions and vitriol. Being a black atheist can be a bit more intense because the black community does not seem to compartmentalize their religious faith as much as other racial groups do. [Being religious is considered part of being Black]. Religion in the black community seems to permeate every area of the community, as well as the monolithic assumption that “real, authentic black people” are not only theistic but Protestant and Christian.

She then stated very plainly why she thought there is a need for race-focused groups. They are important “not so much for external communications for those outside the black community, but as an advocacy against the monolithic diatribe within the black community.”

Traci-Lynne is a member of Black Nonbelievers of Atlanta. She is also “very out and active on Facebook, a member of American Atheists and a fan of any and all TED/TEDx events. Both she and her husband are active members of the Unitarian Universalist Congregation of Atlanta.”

Use the Internet to find other like-minded people. While you look for other freethinkers of color begin to move beyond the illusion of race to humanity. Understand what you are about to do and understand you will lose some relationships and social networks along the way. Read as much as you can! Books, authors [and people of note] I would recommend would be: Norm Allen, Jr., Sam Harris, Jamila Bey, Neil deGrasse Tyson, Richard Dawkins, Daniel Dennett, Christopher Hitchens, Carl Sagan and Susan Jacoby.