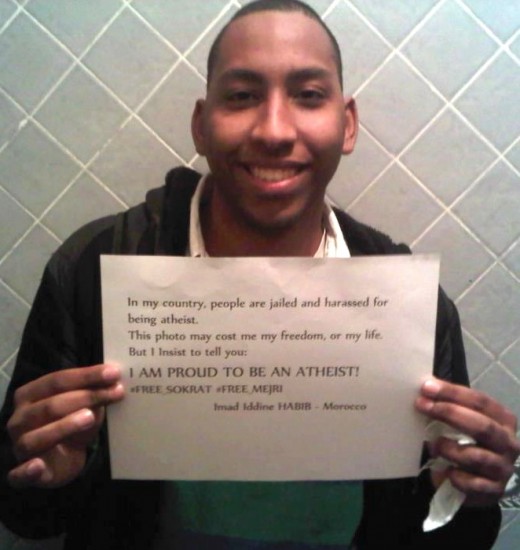 Imad Eddin Habib of Morocco is no shrinking violet. At 22, he is a very outspoken and active atheist who seems to delight in ruffling feathers by the mere mention of his nonbelief. On Facebook, he posted a smiling photo of himself holding a sign that reads:

In my country people are jailed and harassed for being atheist.
This photo may cost my life, or my freedom.
But I insist to tell you:
I AM PROUD TO BE AN ATHEIST!

His online activism has gotten him in trouble, according to the publication Free Arabs (whose tagline is “Democracy, Secularism, Fun”). They report that Moroccan police have gone looking for him (even breaking into a house where they wrongly thought he lived), as Imad has gone into hiding.

Imad is not wanted for “atheism” per se, as atheism is not a crime in Morocco. But “shaking Muslims’ faith” is.

Just before he disappeared, he posted this online, in possible goading of his persecutors:

There is no God but… Mickey Mouse!

At CFI (my employer) you can be sure we’ll keep an eye on this case as it develops. But on a personal note, in the midst of so much tragedy as nonbelievers and other dissidents are being cracked down on, it’s kind of inspiring to see one man seeming to delight in his role. I hope he stays safe.

May 2, 2013
The March of Reason: A Film About Atheists, Science, the Reason Rally, and Reality
Next Post