Robert Peoples is the CEO of Affinis Apparel (pronounced uh-FIN-is) — a clothing company promoting human rights and freethinking through urban indie fashion. Undoubtedly, Robert has been an atheist for more than half of his life, an aspect he concealed from family and friends until recent years. His childhood rearing was geared toward a Christian (specifically Baptist) upbringing in central New Jersey. Although Robert’s mother was involved in the church, her perspective was not a fundamentalist position. Like his mother, Robert believed during his adolescent years that Jesus Christ was his Lord and personal savior and did not condemn others for possessing alternative views about “God.” Robert remembers saying as an adolescent: “I know what the preacher says about homosexuality [and other worldviews], but some of my closest friends are lesbian, gay, Muslim, and atheist, and guess what? They are human beings with love just like me.”

Robert’s family and friends did not hold other people of different beliefs and sexual orientations in contempt like so many Christians and other people do today. The attitudes and behaviors exuded around Robert from his personal relationships kept him waddling a little longer than needed under the Christian fold. However, it was not the people within his intimate circle that decimated his belief in a god — when Robert started reading the Bible for himself instead of accepting his church’s interpretations, the journey to atheism began unfolding. I can relate to this: Recently, on another blog, I wrote on the expectations of Black atheists and stated “it wasn’t someone’s philosophical arguments that led me to my atheism, it was science classes and a lack of answers to my prayers.”

Juxtaposing the Bible with Nietzsche’s dissection of philosophical and ethical flaws pertaining to Christian theology, Robert was awakened to the realm of “existentialism.” By about the age of 14, Robert had studied literature such as The Essence of Christianity by Ludwig Feuerbach, The Age of Reason by Thomas Paine, Tractatus Logico-Philosophicus by Ludwig Wittgenstein, and the ultimate life changing work for Robert — On the Genealogy of Morals by Friedrich Nietzsche. Needless to say, Robert’s atheism was secured by age twenty. He read the aforementioned literature on the advice of his cousin Harold, the first genius Robert personally knew — “May you rest in peace, cousin.”

Recently — within the past three years — Robert openly admitted he was an atheist to his family and friends. Ironically enough, no one was very surprised by his atheist leanings. Robert’s family even said: “We all knew you were a non-believer; we just thought you would turn around, but…”

The non-belief factor did not interfere with Robert’s relationships with his family and friends — more importantly, some of his friends are now atheists due to conversations about philosophy and theology. People are not always fortunate enough to maintain the love and respect from peers and family after a mind-blowing admission of atheism; however, in Robert’s case, he was one of the lucky ones.

Robert’s advice for those in the Black community struggling with the perils of atheism and its public disclosure is this:

Never live your life through the eyes of other people’s expectations; in turn, happiness will forever flee from you. When talking with several black folk, I remind them of our ancient Egyptian ancestry and how the Egyptian priests were not religious at all — rather, they were scientists, shrouding higher knowledge in the form of societal religiosity; preserving it from foreign exposure. Indeed, the curators of the higher sciences were animists and atheists before the Maafa (African Holocaust) of Christian and Islamic captivity of Northern Africa.

As to why “Black Atheism” needs to be highlighted, Robert had this to say:

It is presumptuous to assume atheism is of European persuasion. Indeed, the erudition of Greek philosophy was foreign to Greece — as it traveled from the lands of Timbuktu and Egypt aspiring the greatest of Greek (?) philosophers to risk [and/or] give their lives in opposition to the Greek gods. Because this knowledge was abased from our memories due to Christian and Islamic occupancy, it is sensible to pay tribute and patronize black non-believers in America and abroad to keep inspiration flowing and encourage those rattling in the closet to come forth flat footed and squared shouldered in this fight for mental freedom.

Robert is a member of the Freedom from Religion Foundation (FFRF) and the Human Rights Campaign (HRC). Robert is also the founder of the Revolution in Photography Project; a provision of Affinis, LLC. He was also the book designer for Dr. Darrell C. Smith’s wonderful literary collage — You Are Not Alone: Blacknones, a work that is a must-read highlighting personal testimonies of black folk through their journey into atheism. 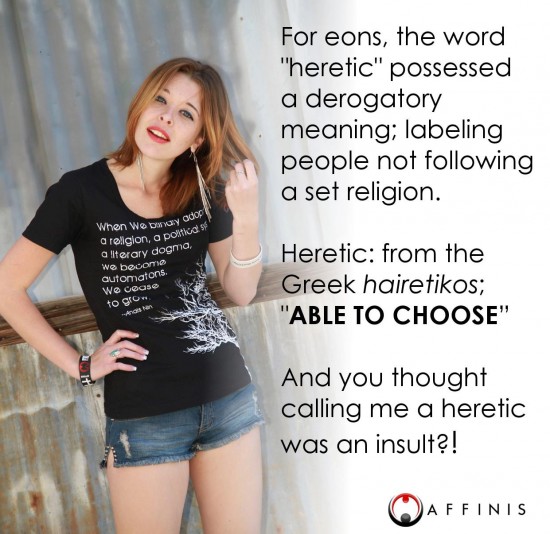 April 30, 2013 Richard Dawkins and Lawrence Krauss Discuss New Movie on Toronto Morning Show
Browse Our Archives
What Are Your Thoughts?leave a comment