In the Wake of the Boston Bombings, a Petition to Remind Political Leaders That Healing is for Everyone April 26, 2013 Hemant Mehta

In the Wake of the Boston Bombings, a Petition to Remind Political Leaders That Healing is for Everyone

Atheists were excluded from last week’s “interfaith” service for the victims of the Boston bombing, as if we had no one to mourn or no stake in the matter, and despite the fact that Boston is home to a large non-religious population.

It’s likely that decision was made without ill intent but it’s not because we didn’t make an effort to be included. Governor Deval Patrick and Melissa Rogers (Director of the White House’s Office of Faith-Based and Neighborhood Partnerships) need to know that we’re not taking this snub lightly.

To that end, Harvard’s Humanist Chaplain Greg Epstein has created a petition so that this sort of exclusion isn’t forgotten the next time such a tragedy occurs:

Despite numerous conversations and requests with your offices, we were denied even a single seat in the Cathedral. This added confusion and pain to the grief of secular Americans in Boston and beyond.

Governor Patrick and Ms. Rogers, our community is neither small nor antireligious. Every week in Boston, Humanists and nontheists gather to serve, to help one another raise good kids, to celebrate life, and to mourn death. We hold leadership positions in major interfaith coalitions. And we have prominent religious allies who are aware that Gallup lists Boston among the top ten least religious metro areas in the United States.

Therefore, we are calling upon you to meet with us in the coming weeks, to hear our stories, and to ensure that, in the future, healing and unity will include everyone. We would also like the opportunity to tell you about our efforts to support the inclusion of members of other groups. For example, we seek to ensure that Muslim, Sikh, Arab, and South Asian communities are not singled out or intimidated. And we stand vigilant against security measures or other moves to curtail civil liberties and cast suspicion around these attacks while our nation considers immigration reform.

I’m proud to be one of the signers of this document and I hope you’ll join me. 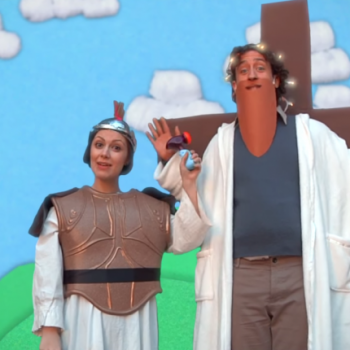 April 26, 2013
That Religion Doesn't Make Sense (A Song for Children)
Next Post

April 26, 2013 Christian Right Leader Bryan Fischer: Gay People Are As Immoral As Shoplifters!
Browse Our Archives
What Are Your Thoughts?leave a comment