***Update***: I think I’ve located the school in question but I am awaiting confirmation that this is their quiz.

On Reddit and the atheist blogosphere, this image was circulating last week: 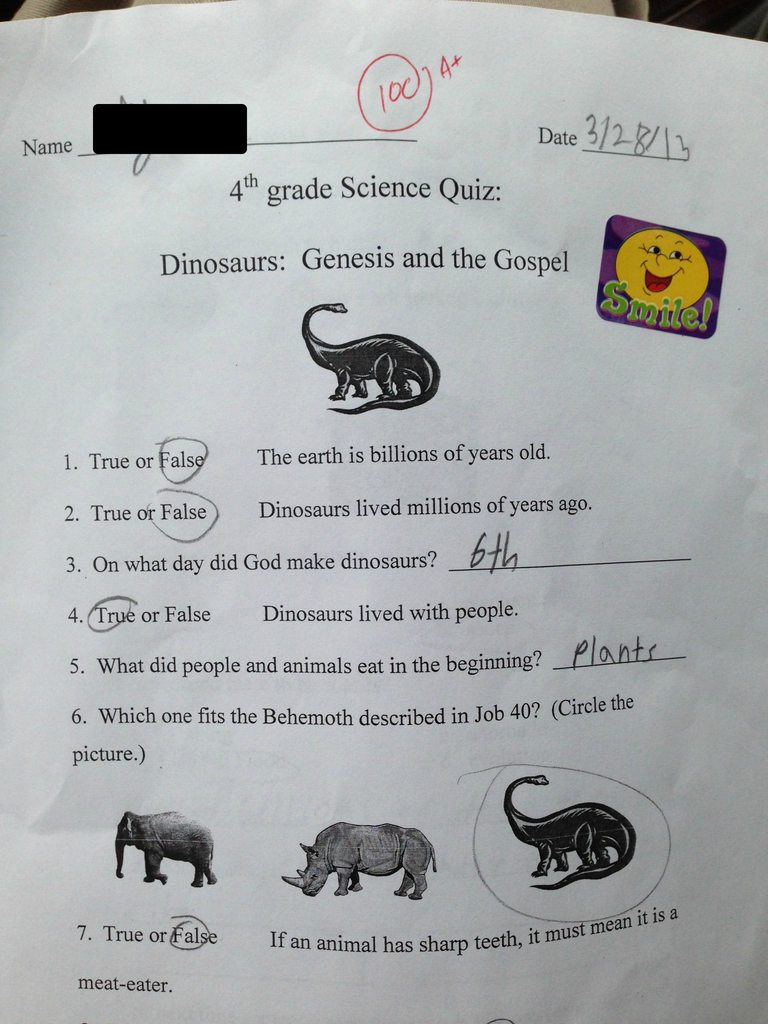 It’s supposedly a fourth grade science test from a private school a South Carolina. But we don’t exactly know which school because the submitter wouldn’t say. He said he got the quiz from his friend whose daughter attends the school and they’d like to keep that information under wraps (for the sake of the daughter) until the year ends.

Well, the people at Snopes tried to get to the bottom of this. They heard from the “friend” with the daughter. He wouldn’t tell them the name of the school, so we can’t technically verify that this is real (Snopes says this story is “Undetermined”), but we do get a little more information, including the full second page of the test: 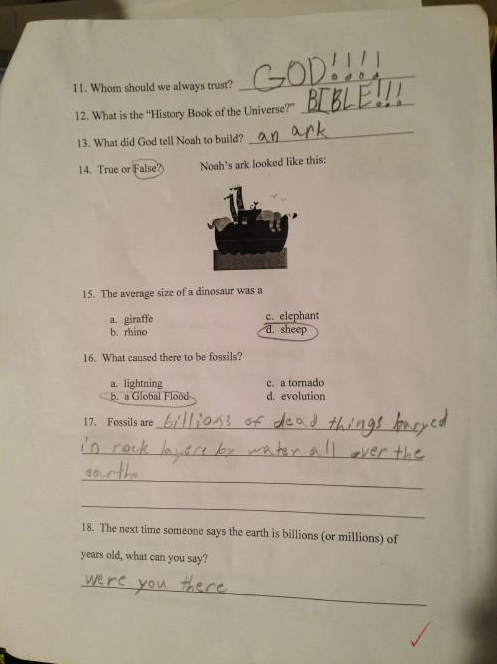 I have since taught my daughter differently, but I am sure she is confused now and plan to make sure she understands that teachers are people too and can be factually wrong.

It’s a great school for Reading, Writing and Math. She is ahead of most of her peers and also is taking Latin there. But I now know to be vigilant for the rest of the year about her science teachings.

She will not be attending the school next year …

Perhaps the scarier moment is when he realized she was being brainwashed by Ken-Ham-like material:

I didn’t know that this was being taught to her until we heard a radio commercial together about the Discover the Dinosaurs exhibit was coming to the TD Convention Center [in Greenville, South Carolina].

The Commercial starts out, “After 65 million years, the dinosaurs have returned …” She commented immediately that it was only four thousand years ago. When I corrected her, she snapped back, “Were you there?”

At least she won’t be going to that school after this year… but, even if it’s legal, no school should be brainwashing kids like this in the name of science, and the father and the Reddit submitter have a duty to name the school when the time comes so we can expose them. (I’ll stay on top of that.)

April 25, 2013
Sam Harris (Literally) Fights with a Reporter
Next Post

April 25, 2013 Challenge to Christians: Wear an Atheist T-Shirt and Gauge Reactions
Browse Our Archives
What Are Your Thoughts?leave a comment