Don’t Hang the Ten Commandments in the County Jail When Eight of Them Are Perfectly Legal April 24, 2013 Hemant Mehta

In 2010, Robert Arnold (below) was elected Sheriff of Murfreesboro, Tennessee. And he’s finally figured out how to lower crime rates, help prisoners, and get re-elected all at the same time: By posting a copy of the Ten Commandments in the lobby of the Rutherford County Jail: 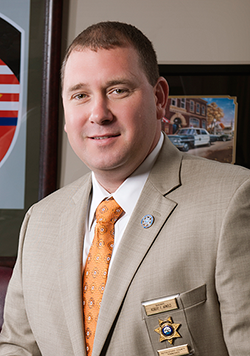 Arnold in 2012 accepted a framed copy showing the Ten Commandments, the Declaration of Independence and the Bill of Rights from June Griffin, a Rhea County activist.

Riiiiight. I remember learning in U.S. History class about all those times Congress added Amendments to the Declaration of Independence… and we all know how strong the country’s laws are against worshipping other gods, praying to false idols, taking the Lord’s name in vain, working on the Sabbath, disrespecting your parents, cheating on your partner, lying, and coveting.

So 80% of the Ten Commandments aren’t even dealbreakers when it comes to our law.

Does Arnold even know what the Ten Commandments are?! Apparently not.

He also doesn’t know that the local county courthouse was banned from putting up a Ten Commandments plaque there (even in the midst of other historical documents):

“That was before me,” Arnold said. “I really don’t know all the details about that.”

Then do some research!

Steve Cates, who sued the courthouse over the commandments, and who happens to be a Christian, doesn’t get why he has to keep fighting these battles over and over:

“I just don’t understand it,” said Cates, a retired Riverdale High School government and economics teacher who is active with the Rutherford County Democratic Party. “If I want to honor the Ten Commandments other than the way I live in my life, I can post them on my house if I own the property. I can post them in my yard.

There’s nothing to understand. Arnold just thinks the county jail is an extension of his church. Maybe he needs a lawsuit to do the right thing since the laws aren’t a strong enough deterrent for him. (I’ve alerted FFRF.)

Arnold would be better off looking for a job as a preacher since that’s what he obviously wants to be doing.

April 24, 2013
Bill from Louie Gohmert is Literally the Opposite of Church-State Separation
Next Post