Andrew Sullivan on ‘High-Minded Nonsense’ of Liberals on Tsarnaev Brothers 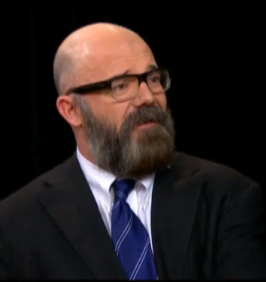 There has been a swirl of debate around what might or might not have been the motivations behind the Boston bombing attacks allegedly carried out by the Tsarnaev brothers, but one voice has stood out to me in this discussion: that of Andrew Sullivan‘s.

Sullivan began by confronting the garment-rending of Glenn Greenwald, accusing him of “left-liberal self-parody.”

[T]o dismiss the overwhelming evidence that this was also religiously motivated — a trail that now includes a rant against his own imam for honoring Martin Luther King Jr. because he was not a Muslim — is to be blind to an almost text-book case of Jihadist radicalization…

To state today that we really still have no idea what motivated him and that rushing toward the word Jihadist is some form of Islamophobia seems completely bizarre to me.

When will some understand how dangerous religious fundamentalism truly is? And when will they grasp that a religion that does not entirely eschew violence (like the Gospels or Buddhism) will likely produce violence when its extremist loners seek meaning in a bewildering multicultural modern world? This was an act of Jihad.

He later dips into the hubbub as to whether Sam Harris and other “New Atheists” are critical of Islam to the point of racism or bigotry. Now, Sullivan and Harris have long been at odds theologically, having a few years back engaged in a fascinating (and often testy) written debate on the subject of religion. But when Harris started being attacked by folks such as Greenwald, Sullivan sided with Sam. He first quotes Harris, who says:

[E]ven if Noam Chomsky were right about everything, the Islamic doctrines related to martyrdom, jihad, blasphemy, apostasy, the rights of women and homosexuals, etc. would still present huge problems for the emergence of a global civil society.

To which Sullivan says:

How can one seriously deny that? All religions contain elements of this kind of fanaticism. But Islam’s fanatical side — from the Taliban to the Tsarnaevs — is more murderous than most.

Later, Kevin Drum carries the “we don’t know yet” flag as to whether the attacks were religiously motivated, and Sullivan calls it “high-minded nonsense.”

We know full well that Tamerlan had become a total extremist in his religion. He was thrown out of his own mosque for being a bigot; his family complained about his obsessive religiosity; he berated others for not being sufficiently devout; he had archaic notions of women’s role in society; he gave up his beloved boxing because of Islam. His YouTube account is full of Islamist extremism. And he deployed terrorist violence because of it.

That’s Jihad, Kevin. It’s religion in its most toxic form…

[J]ust as silly as jumping to conclusions prematurely is the posture of aloof skepticism when the bleeding obvious is staring right at you. This was religious violence — the most terrifying any can be, because its perpetrators believe that God Almighty is protecting them.

Now, why am I focusing on Sullivan? First off, I’m an enormous admirer of his writing (whether I agree with him all the time or not), and I’m particularly interested in the perspective of a man who is such a contradiction on the surface: nominally conservative, gay, deeply Catholic but against the church hierarchy, etc. He is a vociferous defender of the virtues of faith, but also coldly realistic about its dark side.

I’m not saying I have any particular understanding or position of the alleged bombers’ motivations myself. But I am very wary of liberals’ sensitivity overreach that sometimes wades into irrational forms of ill-founded tolerance, and I will also say that when Andrew Sullivan links arms with Sam Harris, I’m going to pay attention very closely.

April 24, 2013
Autistic Kids Lack the God Part of the Brain and Need Therapy to Fix It, Says Head of a Turkish Autism Organization
Next Post