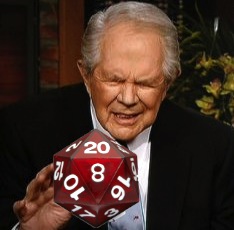 Pat Robertson is such an easy target that I almost hesitate to keep blog-kicking him. But the material he offers up is just irresistible.

Right Wing Watch caught Pat answering a question about whether it’s okay for a Christian to play video games with magic in them. A little bewildered, Pat reaches back to the 70s and 80s and advises against playing Dungeons & Dragons, which, of course, is not itself a video game. (Yes, it’s spawned countless video games, but you and I both know that’s not what Pat’s talking about.)

Now, I used to play quite a bit of Dungeons & Dragons in my day, though not nearly as much as I would have liked. (By the way, this hunky movie star guy, I can personally attest, is a kick-ass Dungeon Master. Like, a real maestro.) I first became interested in it when I was about 11 or 12, and my parents helped me get a few of the starter books. Now, when my late grandfather caught wind of this interest, while we were out shopping for something or other, he forbade my grandmother from purchasing me any additional books on the subject. “No, no,” said my gruff (yet lovable), short (like me), and Mediterranean grandfather. “None of that satanic crap.” My grandmother, true to form, rolled her eyes.

Not too much later, I remember reading the book The Dungeon Master, by a detective who struggles to find a missing kid who’d disappeared while playing D&D, and the swirl of controversy around the “cult” of D&D. I remember really liking that book.

So that’s what I thought of when I saw ol’ Pat getting antsy about “games” and, as he pronounces it, the “OCK-ult.” Remember kids, it’s not “is it wrong or not wrong. I just think we should [pause] flee from evil!”