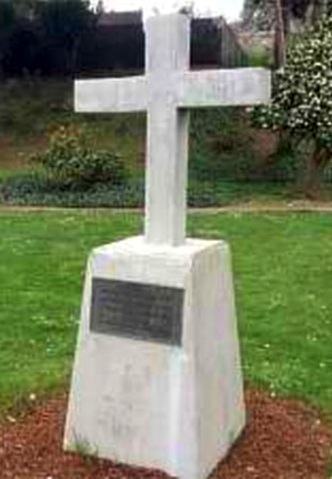 Imagine the frustration of a conservative Christian member of Congress, sitting idly by while godless jackals attack sacred war memorials with religious symbols on public property with their petty little lawsuits. How could such a person just sit there and do nothing? Can’t these atheists be stopped?

Rep. Duncan D. Hunter of California is trying. Yesterday, he introduced the War Memorial Protection Act, a bill that would enshrine into law the ability for federal war memorials in the public square, like the one in Coos Bay, Oregon, to include religious symbols. It’s a direct response to moves by groups like the Freedom from Religion Foundation and Americans United for Separation of Church and State who make it their business to, well, separate church (the crosses and other religious symbols) from state (the U.S. government’s memorials, existing on public property and paid for with public funds).

The bill would be all the more remarkable if it were a new idea. But it isn’t. Last year, in fact, the U.S. House passed by voice vote the same act, also introduced by Hunter. Here’s how the LA Times reported it then:

Hunter said his legislation was needed in the face of legal challenges against the Mt. Soledad Veterans Memorial “and the likelihood of more to come.”

“Our Constitution protects the freedom of religion, not freedom from it,” Rep. Brian P. Bilbray (R-Carlsbad), a bill co-sponsor, told his colleagues.

That bill never saw the light of day after its passage in the House, not surprisingly, what with a Democratically-controlled Senate. But this time around, there is a new co-sponsor, and it’s someone from the Senate itself: Sen. Richard Burr of North Carolina (the state that just flirted with allowing itself to establish a state religion).

Said Burr to the Washington Times:

Many of our men and women in uniform have strong religious convictions, often finding that their faith has played a role in their service. This bill would recognize their beliefs by ensuring that religious symbols, regardless of affiliation, are allowed to be part of military memorials.

Which, of course, is fine, as long as it’s not the government that’s “recognizing” religious beliefs.

So I think it’s at least somewhat notable that there’s a senator attaching himself to this iteration of the bill. I still don’t believe it will move past the House, if it even gets to a vote, but I can also envision a scenario in which a sufficient number of conservative Democrats like Mark Pryor of Arkansas or Mary Landrieu of Louisiana see this as a no-brainer to win some good will back home, and convince Harry Reid to allow it to go to a vote.

But I doubt it. And if it did, well, there’s always the Constitution.

April 12, 2013 Camp Quest Responds to Oklahoma Restaurant's Cancellation of Fundraiser
Browse Our Archives
What Are Your Thoughts?leave a comment