On Tuesday, the Subcommittee on Energy and Power held a hearing on H.R. 3, the Northern Route Approval Act which deals with the Keystone pipeline. If approved, the pipeline would carry crude oil from Canada into the U.S. Many environmentalists don’t want to see the pipeline approved because they fear that the increased access to petroleum products could accelerated global climate change. Whether you agree that the pipeline is a bad idea or that the benefits outweigh the risks, the scientific consensus regarding global climate change is that the current spike we’re seeing is, at least in part, caused by human activities.

But Rep. Joe Barton (R-TX) disagrees. He believes that Noah’s Flood is proof that global climate change is not human-made: 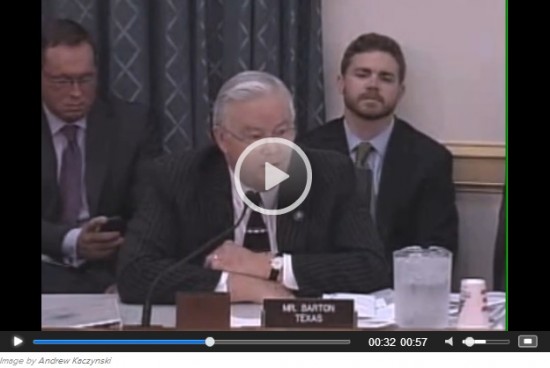 I think you can have an honest difference of opinion on what’s causing that change without automatically being either all in that it’s all because of man kind or that it’s all just natural. I think there’s a divergence of evidence. I would point out that if you’re a believe in the Bible, one would have to say the Great Flood is an example of climate change and that certainly wasn’t because mankind had overdeveloped hydrocarbon energy.

Certainly the Biblical story of Noah’s flood would count as an example of global climate change, if it had actually happened. But, even if you suspend your disbelief regarding the Biblical flood story, it’s an embarrassingly blatant fallacy to say that a past example of environmental changes caused by a deity is proof that the current climate change is not due to human actions.

I wonder what Bible-believing Christians will assert next. Maybe: “God made the serpent in the Garden of Eden slither on its belly. That’s evolution! So Darwin’s natural selection idea couldn’t possibly explain the diversity of life on earth.”

Or even: “when people think they’re experiencing an alien abduction, they’re actually seeing demons. If you’re a true believer, you’ll just pray and the demons will disappear.”*

Of course, this isn’t the first time a Bible-believing Christian has said something ignorant regarding global climate change. And it likely won’t be the last time.

If you’d like to watch the entire hearing, you can see it here. Barton’s flood comments begin at the 1:03:25 mark.

*Technically, this assertion has already been made by my “Bible-believing Christian” uncle. He’s a very intelligent man but he happens to believe some crazy stuff.