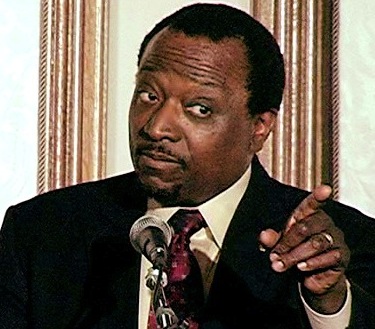 Alan Keyes might be the most entertaining man ever to run for president. Always running on the fringes of what is already a very fringe-y GOP, he never ekes out more support than the what could be confused for the margin of error, but he instills a fervency of devotion from those who have gone cuckoo for Keyes.

Ambassador Keyes (and yes, he was Reagan’s Ambassador to the UN Economic and Social Council) recently spoke at an event at Spring Arbor University in Michigan and did not fail to bring the crazy, saying that the United States was near death, because we are currently violating “the premise of the existence of our country as a political entity.” The premise, of course, is that God Did It.

Here’s the report from MLive:

Keyes said while abortion, same-sex marriage and separation of church and state are not basic human rights there are leaders who are trying to “fabricate” rights.

“People who sit on the U.S. Supreme Court take it among themselves to argue that somehow there should be separation of church and state,” he said. “Nothing in the Constitution requires separation, nor could it because we cannot separate the country from its finding premise without destroying it.”

When arguing what a fundamental right actually is, Keyes gave an offbeat example of a young child who had a habit of “picking in their nostrils and “eating what came out.”

No, really, he said that. The implication was that just because you feel like doing something doesn’t make it right.

And this kind of frantic hyperbole is nothing new for Keyes. Only days ago, he reminded folks of his existence by calling Sen. Rob Portman‘s support of gay marriage a “crime against humanity” because:

If you go down a road that satisfies your personal predilections and relationships and sacrifices the common good of the country, including the elementary institution by which civilization is sustained, then you’re not only derelict in your public duty, you are abandoning your obligation as a human being.