Tierra Hammond is a 23-year-old Californian. She describes her mother as “religious” but not “overly so.” She was a seasonal Christian, attending church on Easter and Christmas, but didn’t mind going there… until she was seven and her mother entered the army leaving Tierra with her very devout aunt.

If she deemed a cartoon unacceptable, my younger sister & I were not allowed to watch it. She didn’t let us listen to the radio, unless it was gospel, & had a heart attack at any mention of sex. I went to church 3 times a week until I was 9. Around that time, I began to read the Bible. This was the beginning of my non-belief. 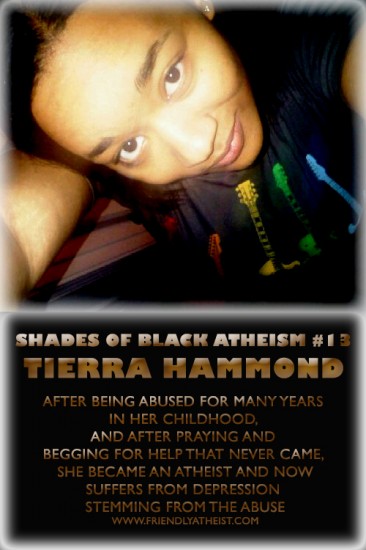 When her mother returned, Tierra reverted back to being a twice-a-year Christian. I asked her why she never adopted religious and her conversion story was very straightforward: She said she suffered from depression her whole life and was abused for many years in her childhood, and although she prayed and begged for help… it never came. If ever there was a reason to be an atheist, I find this to be the most compelling.

The important people in Tierra’s life knows that she is a non-believer. She doesn’t associate with most of her family members for other reasons but her mother, sisters, and grandmother are aware. Her grandmother, unfortunately, has responded negatively to this: “Our relationship has gone from talking at least once a week for hours at a time to talking 3 times in the past 6 months for maybe 15 minutes before she rushes me off the phone.”

I wish this were uncommon and hard to relate to, but it’s one of the realities for many black atheists who live openly and honestly.

Tierra’s partner is a Christian, but she said while laughing that they don’t argue about religion “often, at least.” He is supportive of her beliefs and doesn’t make her uncomfortable with gospel; in return, she won’t watch Christopher Hitchens’ debates when he’s around. When he goes to church she simply goes about her day until he returns. She respects his faith and he respects her lack thereof. They have agreed not to baptize their son or take him to church until he is old enough to make his own decision on the matter.

I asked if she thought that the Black atheist experience is different from that of non-Black atheists:

I think all things are different when you’re black. Life, in general, can be different. Religion is a huge part of black culture. Our ancestors had their cultures stolen and they were forced to take on a new one. We know better now, so we should do better. Not all black Christians can face the fact that they are only Christians because their ancestor’s masters were Christians.

I also asked her about race-focused groups. She felt that all minorities needed groups that catered to their life experiences whenever possible. “Not only is our society dominated by religion, it’s dominated by white men. White atheists don’t understand the unique struggles encountered by the atheist of color, just like atheist males don’t understand the struggles associated with the atheist female.” I agree.

When asked what advice she’d give to closeted Black atheists and/or Black atheists in general, she said they need to take “their time coming out. It’s hard. It sucks losing family and friends.” She further intimated how difficult and confusing it was to break the mental chains that religion has bound so many with. “But they should know that they are not alone. And if your family does disown you, you can find new family in our community. I’ve met lots of great people.”

April 10, 2013 Tacoma Coffeehouse Owners Change Their Mind About Letting Atheist Folk Singer Shelley Segal Perform In Their Shop
Browse Our Archives
What Are Your Thoughts?leave a comment