Guys, you know that I can be pretty skeptical. You might even go as far as to call me cynical. But seriously… what follows is a miracle that will be discussed for years and generations and centuries to come.

Behold: the cracker that contains a sign from god:

I’ll give you a moment to recover from the awe.

Okay, pull it together.

“I believe that it’s a sign, a sign from God,” Patti Burke told WKMG. “He is still in our life every day, and he wants to show that to his people.”

The cracker in question has two markings, or imperfections, on its surface. Burke says the first marking is of a cross with a circle around it. The second marking, near the head of the fish, represents a golden crown.

Funny, I describe it as “The top of a Phillips-head screw and a dent.” But, hey, maybe I’m just being cynical.

Burke discovered the cracker — one of the “between two and three pounds of the crackers [she eats] per week” — as she inspected “each one for the optimal amount of savory coating.” She now carries it around with her in a gauze-filled earring box. 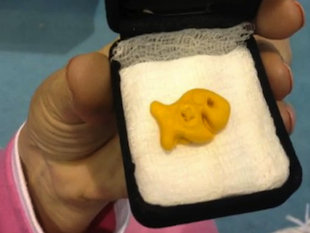 Here is my favorite part of the article:

At first, she thought maybe she had won a special promotion from cracker manufacturer Pepperidge Farm.

“They called me back and said there’s no way this could have been printed like that in the factory,” Burke told KSAT. “They said it sounds like something miraculous happened and we don’t know how it happened.”

(That comment has not been confirmed by Pepperidge Farm.)

Burke isn’t alone in thinking that this cracker is magical. Her pastor, D. Scott Worth, totally has her back on this:

Yes, pastor. That’s what Easter is all about. Jesus rose from the dead so that 2000-some-odd years later, he could bring us his message in the form of a couple dents in a mass-produced cheese-flavored, fish-shaped snack.

Now, if you’ll excuse me, I have a box of Cheez-Its to polish off and I can’t wait to meet my maker.

April 7, 2013
What Can Atheists Learn from Religion?
Next Post

April 7, 2013 Richard Dawkins Hangman
Browse Our Archives
What Are Your Thoughts?leave a comment