Support This Group Before Religious Intolerance Makes the Kitten Cry

Secular Panthers is the student atheist group at Georgia State University. They just formed this year and they already have some big plans.

Starting with responding to campus preachers.

There have occasionally been spontaneous counter-protests, but there has never been any kind of sustained response. Secular Panthers is going to organize one. We are making inroads with some of the other student organizations (some religious, such as the J. Reuben Clark Law Society for religious students at the GSU Law School; some not, such as the Alliance for Sexual and Gender Diversity) to put together a long-running campaign to get many different organizations out on the Plaza engaging in real dialogue, not just a counter-protest, whenever the protesters appear. Our vision, essentially, is to have an environment where one extreme, emotionally-damaging voice is countered by a whole community of voices, hopefully with the effect of crowding out the hate.

Not that counter-protests are bad, but this is a novel and powerful approach to dealing with crazy preachers. If it works, it could be a model for several other groups.

In addition, the group plans to run a significant minority outreach campaign to bring in people from diverse backgrounds into their group.

As with just about all student groups, their school can help fund some of their projects but they could use some money to help get word out about their organization (to print posters, do some online marketing, bring in speakers, etc). If you have a few bucks to send their way, they’re doing a fundraising campaign and would appreciate your support: 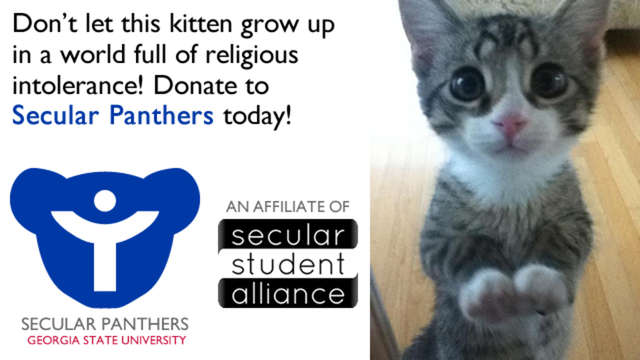 These are atheists in the South. They’re islands of reason in a sea of insanity. Help them grow their islands.
Previous Post

April 6, 2013
Why the Youth Are Falling Away from Religion
Next Post