The ‘Stomp on Jesus’ Professor Finally Tells His Side of the Story April 2, 2013 Jessica Bluemke

Last week, I wrote about a controversy concerning a student at Florida Atlantic University, his professor, and “Jesus” written on a piece of paper. I asked the question “Did a student really get suspended for refusing to ‘stomp on Jesus’?”

The answer, it seems, is probably not.

If you didn’t catch it, here’s a quick recap:

Junior Ryan Rotela, a Mormon, was in his Multi-Cultural Communications class taught by Dr. Deandre Poole. As a class activity, Dr. Poole asked all students to get out a piece of paper and write “JESUS” on it. He then asked them to put the paper on the ground and step on it. Rotela refused and, as a result, was suspended from Dr. Poole’s class… or, at least, that’s Rotela’s version of the story.

Last week, I postulated that it seemed unlikely that this is was how the story actually went down, but we only had Rotela’s account to work off of.

Normally, I really love being proven right, but this particular story has me pretty unhappy with the way it panned out.

Yesterday, Dr. Poole finally broke his silence in an interview with Inside Higher Ed‘s Scott Jaschik, and, as many of us suspected, he has quite a different version of the story:

First off, Poole wants people to know that he never told anyone to “stomp on Jesus,” to quote the headline widely used in articles criticizing him. He said he asked people to step on the piece of paper.

Poole said that, as best he could tell, only one student in the course had an objection. That student — whom Poole did not name in the interview, but who has come forward in local news reports saying he was suspended for objecting to the exercise — refused to participate and then said repeatedly, Poole said, “How dare you disrespect someone’s religion?”

After class, the student came up to him, and made that statement again, this time hitting his balled fist into his other hand and saying that “he wanted to hit me.” While the student did not do so, Poole said he was alarmed and notified campus security and filed a report on the student.

Rotela denies these claims and even has a lawyer to represent him (represent to whom, I am not really sure).

So there we have it, right? One man’s word against the other’s. Very different accounts of the same story. If that’s all it was, I would just say it’s a silly misunderstanding and move on.

But it’s not. Dr. Poole’s life has been turned upside-down by this “misunderstanding”:

He said he has received hate mail and death threats, some of them coming in forms particularly hurtful to an African American. “One of the threats said that I might find myself hanging from a tree,” he said.

Reporters knock on his door, and he has had some days that he did not feel safe at his home and so stayed elsewhere. “My safety has been in question. There are churches that want to march against me. There are people calling on the university to fire me.”

The university placed Poole on paid leave on Friday, citing safety concerns, and assigned other instructors to take over all of his courses. The university said that Poole will not be on campus, “to prevent further disruption to the day-to-day operations” of the institution.

I don’t even know what to say. I am beside myself over this. How can people do this? Threatening the man’s life?! Over what? A perceived snub to your God? This is insanity.

Oh, and here’s the best part:

Poole is a Sunday School-teaching Christian.

“I am very religious,” he said. “I see how the name Jesus is symbolic. For people like myself, Jesus is my lord and savior. It’s how I identify myself as a Christian.”

The one bright spot (if there is one) is that some people have Poole’s back.

The campus chapter of the United Faculty of Florida released a statement voicing their support for Poole.

Although it is never the intention of a faculty member to offend his/her students, at times controversial material might unintentionally do so. As a result, we then use the classroom to discuss the controversy in a forthright and honest manner. But offense alone never justifies immediate censorship of the material and/or the pedagogy. Galileo offended critics by claiming the earth was not the center of the solar system. Some groups continue to be offended by evolutionary theory. Offense, although to be avoided, sometimes accompanies the advancement of knowledge.

We find it outrageous that critics of Dr. Poole immediately condemn his exercise without fully knowing the facts. When the university administration unilaterally claims that such an assignment will not be taught again without the consultation of the faculty member involved as well as the faculty at large, they shred the principles of academic freedom that legitimate the existence of the university and guide genuine scholarly inquiry.  It is time to defend academic freedom through the maelstrom of uninformed attacks since the controversy will eventually pass but the institution will remain. And the type of institution that remains will largely depend upon whether the core principles of academic freedom are preserved or not.

Finally. A sane voice in all of this. I hope that FAU stands behind their professor. Because he is on a one-year contract, the university could easily not rehire him for next year.  According to the faculty statement, Poole “routinely received high praise from his students and supervisors,” and to not rehire him because of an ignorant complaint would be a tremendous disappointment:

[T]he good faith of the faculty who placed their trust in an administration to defend the academic freedom that defines the university. Lost will be freedom of speech in the classroom to ‘present and discuss academic subjects, frankly and forthrightly, without fear of censorship,’ as is enshrined in our collective bargaining agreement. Lost will be the future scholars who will no longer want to work at an institution whose credibility has been tarnished. Lost will be the current scholars who leave our institution for others that respect academic freedom.

This is bigger than one student being offended in one classroom. It’s about the fact that sometimes people are going to be offended by ideas, and they have to learn how to deal with that offense. It’s like Stephen Fry once said: 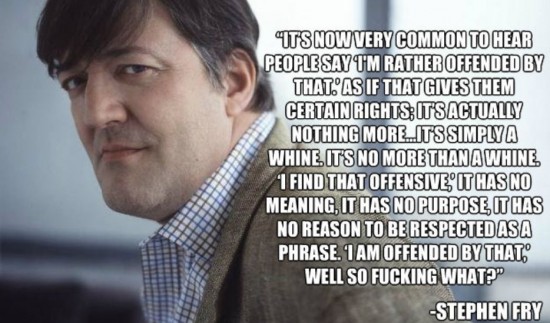 In addition to that, these idiots who are crying out about how Poole hurt their little hearts have so widely missed the point, it is absurd.

If you’ve come to this site and jumped down to the comments section to say “The professor didn’t make students stomp on MUHAMMAD or ALLAH!!!”… just save it. If that’s what you think this is about, you are so desperately missing the point of everything that we can’t have a meaningful discussion about the merits of this lesson.

Poole’s intention was to teach the power of cultural symbolism. Given the overreaction we’ve seen by the conservative media and Rotela himself, it looks like the lesson worked. Hopefully, the other, more thoughtful students picked up on that.

April 2, 2013
The Catholic Church Should Kick Out All Those Bibliophiles
Next Post

April 2, 2013 National Atheist Groups Respond to Growing Incivility in Online Communities
Browse Our Archives
What Are Your Thoughts?leave a comment