Alix Jules… where do I even begin? First, let me explain the big blocks of quoted text you’re about to read. Summarizing much of what he said would have been a huge disservice to this article. I didn’t want to leave anything out and distort his message. I’ll start with what he’s doing today and work my way back.

Alix is the President of the Black Nonbelievers of Dallas. He’s the Coordinator and Chair for the Dallas-Fort Worth Coalition of Reason as well as the Chair for their Diversity Council. (No, not done yet!) He’s the Executive Director for the Fellowship of Freethought–Dallas. And, just to round all of this out, he sits on the speakers bureau for African Americans for Humanism.

The best part of getting these details is that Alix felt “uncomfortable with titles.” He’s just humbly doing what he can to help. I’m not the only one who is impressed with Alix, either; he was even featured in Ebony magazine: 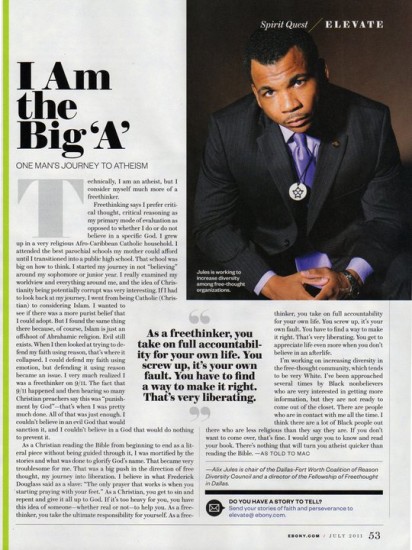 Alix was born into a Catholic family and attended a small church in Brooklyn, New York “where diversity was measured in Caribbean accents and different shades of brown.” He envisioned himself entering the priesthood when he was older. The Church was his existence. Living in an Afro-Caribbean household, he now realizes that it was slightly more superstitious than most black households and probably more religious than most, too. He attended private religious schools until high school. Still, he was a freethinker at heart and eventually examined other religions in depth, including Islam, but obviously none of it stuck.

To my surprise, Alix stated that it took him a long time to call himself an atheist even though he had “severed [his] relationship with god years prior.” He just has an issue with labels. He went on to say:

I was spiritual and agnostic for some time. The term “atheist” was very charged. I now wear my scarlet letter with a qualified amount of pride, always with the understanding that the words I choose can either reflect my moral freedom from religion, and equally be mistaken in emoting arrogance. That word causes so much consternation generally, but within the African American community specifically where race, religion and culture mix — it can be poisonous to any discourse.

I applaud Alix for being open and honest about his beliefs and he has helped a lot of people, including myself, do the same. Unfortunately, this has not been without much sacrifice. Alix stated me that his personal story has left him with very little contact with his family. Still, he said he had found “worthy freethinking surrogates” and has a very supportive wife named Amanda.

He acknowledged that his story of familial rejection is not uncommon in the black community. It also “shares many of the sentiments shared by many former white evangelicals or Islamic apostates. It was very painful at first, but you cope. Different levels of acceptance run in varying circles across different geographies and demographics, even within the Black community.”

When I asked Alix if he felt the black atheist experience was different from non-black atheists, he started off by saying that there are commonalities across the various groups. Many are rejected and losing family and friends hurts. Pain is pain regardless of race. Please let that soak in. A common response I hear when I bring up what it’s like to be a black atheist is a reminder that others have a hard time being atheists, too. No one is denying that!

Alix then went on to make a couple of points worth taking a long look at:

Race and culture nearly dictate what “Black” is and who you are as a person of color. To an extent — it defines the black experience (race, religion, sexuality — and politics). It’s a stereotype to some — it’s an archetype for most. My non-black counterparts may be challenged, as I am often, by claims of being less human, less compassionate, less caring, full of hubris, etc., but I have yet to hear them doused with the insults of being “less white” — or race betrayal.

Although Alix holds positions within several race-based secular groups, he was originally opposed to the idea of them. His primary concern was “white fear and the eventual marginalization of those groups.” He felt that using the “black” descriptor “could easily be used to evoke the ‘Nat Turner-esque’ fear that comes with combining the words ‘black’ and ‘freedom’ (freedom from religious management).”

Atheists aren’t immune from this type of thinking. Previously, he has argued for diversity as the end goal. Still his own experiences with chasing that ideal has led him to reconsider:

Reality: We don’t live in a utopian post-racial America and just because “’we don’t believe” as a whole, does not mean that we behave as equals, have the same points of view, or have common daily experiences. I still get followed in stores. I still get stopped by police when driving the wrong car in the wrong neighborhood with the wrong colored (or non-colored) woman. These experiences shape us and it is arrogant to believe that the secular community is not subject to the diathesis of privilege.

Alix shared a story with me about having security called on him when he attended a secular conference where he was speaking because “he didn’t look like he belonged there.” This wasn’t that long ago.

“Motives for the movement” are also very different. As the overall secular movement struggles to find the balance between “academia and activism” — many non-white groups are working to implement calls to action that have immediate relevance to people’s lives. It’s less about “who’s academically right” and more about “doing right.” It’s about turning secular humanism into a verb. To ignore the differences between us is not as insulting to me as to most — but emotes hubris nonetheless. You’re an atheist. This does not make you less susceptible to racism, misogyny, or any other “ism.” To believe that comes from a place I can’t relate with. The question “Why must you be a BLACK atheist and not just [an] Atheist?” is why we need race based groups.

Marginalization happens anyway. It will continue until the numbers begin to tip the scale (majority rules). The secular community has made progressive moves toward inclusion and visibility, but for people like me, it’s not enough. Understandably, the numbers just aren’t there yet to support it but I also believe that race-based organizations like Black Non-Believers, African Americans for Humanism, Black Skeptics, etc., will do more in building those numbers that will be eventually counted. Given the mistrust that still exists between the races (in general), the impact of seeing Black Atheist groups led by Black Atheists is nearly invaluable. There will always be a need for integrated efforts, but we have some basics that black people in general are incented to address, that the general population tends to ignore. Same is true in the secular community.” 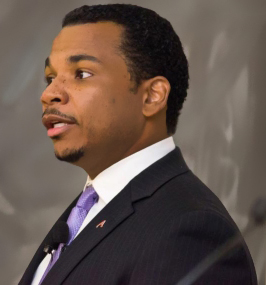 I really wanted to know what advice Alix had for other black atheists. I’ve called on him for advice several times, so listen up; he knows what he’s talking about. He suggested using the Socratic Method (great advice I was given back when I questioning my religious beliefs). For those of you not familiar, please click the link. It is a form of inquiry and debate between individuals with differing points of view based on asking and answering questions to stimulate critical thinking and to illuminate ideas. He’s not necessarily talking about formal debates because they can be of limited value. “We spend more time arguing and less time doing,” he said. He also encouraged others to get active and get connected. Value is there and, after all, we’re social animals. He said to check out Meetup, Facebook, and Google.

“Find a non-corrosive discussion group that meets your needs” and then go! He also said that if you show up at an atheist group (without a racial descriptor in the title), be prepared to be the only person of color. “If people seem a little standoff-ish — it’s often because they don’t know how to approach you. It’s unintentional. You’re probably very welcomed — and they want you there. Don’t judge them on the first meeting. Give them a few.”

I can tell you from experience that it can be uncomfortable at first but they really do want you there. If we don’t give it a chance, then any misconceptions that they have will remain. “Diversity matters least to those that are not personally vested in it. I met someone who would later become one of my best friends and most vocal allies on diversity at one of my first atheist meetups where I was the only person of color there.”

In addition, there are groups Alix recommends: