Atheist Representation on ‘This Week With George Stephanopoulos’

On Sunday’s edition of “This Week With George Stephanopoulos,” Susan Jacoby was a panelist to “discuss the role of religion in our civic debates.” (What should’ve been the fastest panel discussion *ever* — “Role?! Why should it have a role?!” — somehow became an actual conversation…)

Jacoby used her time wisely, making a number of points we rarely hear echoed in the mainstream media:

Stephanopoulos:… You wrote a fascinating article, Susan Jacoby, in the New York Times coming out of Newtown called “The Blessings of Atheism,” and one of the things you write about is that atheists and nonbelievers often feel intimidated from speaking out on public issues as atheists.

Jacoby: I think we heard almost nothing and no secular chaplain, a person representing a secular organization, asked to be at the Newtown ceremony. I asked several of them about it, and they felt they were kind of afraid to. They felt that it would be — it would be taken the wrong way, as if atheists were trying to horn in on this ceremony, which was basically religious.

Let me say, what Dr. Butts said is music to my ears. If all religious people trying to influence politics could separate what they teach and preach in church, and which of course every religious institution and person has the right to state their convictions, just as I do. But the problem is, Newtown was a perfect example of it. There were people sitting in that audience obviously, if we believe the polls, that 20 percent of people don’t belong to any church, and some of those people are atheists and some of them aren’t. It’s hard to tell because atheist is still quite a pejorative, but when President Obama, unlike some atheists who are sitting here, some will tell you that they objected to his mentioning religion at all at that service, which I think is ridiculous. There were a lot of religious people there. Religion is a solace for religious people in grief. But he could very easily have expanded that to say, whether we are religious or non-religious, he could have said that we are all united in our grief, and not made it exclusively, and he should not have been talking about Jesus Christ when some of the parents who lost children are people who don’t believe in Jesus.

Stephanopoulos: Do you feel the need to proselytize?

Jacoby: The need to proselytize in the sense that I want to convert people to atheism? No. The mission, the mission, if you could call it that, of the atheist is not to convert people. It is to put forward our ideas in the public square, and we have had some success. And I’m not talking only recently, but over 100 years, to talk about the importance of science and reason in public policy. And there are many religious people who believe in that, but there are many religious people who are opposed to fact and evidence based thinking.

And here is the point about the problem with religion and politics. It’s not that religious groups shouldn’t have an active role in presenting their viewpoints, as we all must. It’s that all public policy has to have a rationale that goes beyond the religious. Because saying, for example, gay marriage is wrong because my god tells me so, or a certain kind of immigration policy is wrong because my god tells me so, or as was in the past, slavery is right because the Bible upholds slavery. And as we well know, religion was just as much on the side of slavery in America as other — there is no such thing as religion. There are only certain kinds of religions, and how often it is when people say, well, you — this needs to be in public policy because God says so. How much God sounds like our own voice.

That was fantastic. That’s how you do it. That’s how you get unpopular ideas across to an audience that may otherwise not be receptive to them: You say it politely, calmly, respectfully, intelligently, and emphatically.

That’s hard to do when you have the time to write it out.

Jacoby did it off the cuff and did it beautifully. 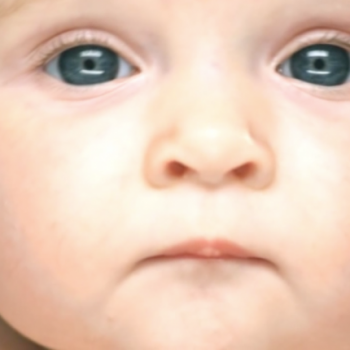