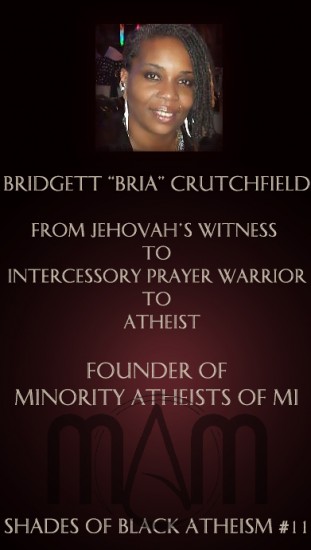 Although she’s the founder of Minority Atheists of Michigan Bria Crutchfield said, “I haven’t always been an Atheist, unfortunately. I was raised a Jehovah’s Witness, baptized at 17.” Angry at being forced to be raised in a high control group, she walked away at 18 and was disfellowshipped at 20. For those of you not familiar with Jehovah’s Witnesses and disfellowshipping, it’s an extreme form of shunning where your entire congregation is notified and it is understood that no one is supposed to talk to you thereafter. Having been raised one myself, I know it’s a very difficult thing to go through. Bria said she “later segued to Pentecostalism” in her 30s. She was very active and was “an intercessory prayer warrior, Evangelist & Prophetess.”

It sounded intense. I’d never heard of “intercessory prayer warriors” before, so I had to look it up:

While God desires all Christ Followers to communicate with him through regular prayer, the gift of Intercessory Prayer is a special endowment of the Holy Spirit that transforms the Christ Follower into a “Prayer Warrior” for the sake of other people and other ministries. The label “Prayer Warrior” is derived from the belief that the person gifted with Intercessory Prayer stands on the front lines of spiritual warfare. This gift is sadly overlooked in the Church because it is seldom utilized in public. However, without Prayer Warriors, many visible ministry accomplishments would probably not be successful.

Not surprisingly, Bria became uncomfortable with what she was ministering and walked away from it all at age 40.

Bria called herself “a very out Atheist” much to the chagrin of her family, a reaction she found amusing. I get that: It affects her familial relationships in that they believe she purchased a straight ticket to hell and they have to pray for her soul.

I asked if she felt the Black atheist experience was different from non-Black atheists. She answered in the affirmative: “Our needs are often not taken into consideration. And when attending conferences you can count the number of black Atheists in attendance, usually on 1.5 hands. It can be disconcerting at times, but I know the day will come when we are realized.” She also saw the positive in having race focused groups: “If the secular community would incorporate ALL black Atheists and not only the prominently known black Atheists, race-focused groups wouldn’t be necessary.”

Bria gave some recommendations for both closeted, questioning, and even “out” black atheists, including Sikivu Hutchinson’s book, Moral Combat, and Darrell Smith’s newly-released book Black Nones: You Are Not Alone. She also suggested the Facebook group Black Atheists of America and to join a local meetup group. If one isn’t available: start one.

“To those who aren’t out, I’d advise them to come out when they’re ready. Do not allow others to pressure you to come out. It’s a transition and the journey can be difficult. For those who feel they need to get things off of their chests, I’d suggest creating a blog or a Youtube channel… you can remain anonymous.”

March 25, 2013
The Auto-Tuned Bible with Levitical Lyrics
Next Post