North Carolina Church Refuses to Marry Heterosexual Couples Until Gays and Lesbians Can Get Married, Too March 20, 2013 Camille Beredjick

North Carolina Church Refuses to Marry Heterosexual Couples Until Gays and Lesbians Can Get Married, Too

Green Street United Methodist Church in Winston-Salem, North Carolina says it won’t perform any marriages between opposite-sex couples until same-sex couples can legally marry in the church as well. 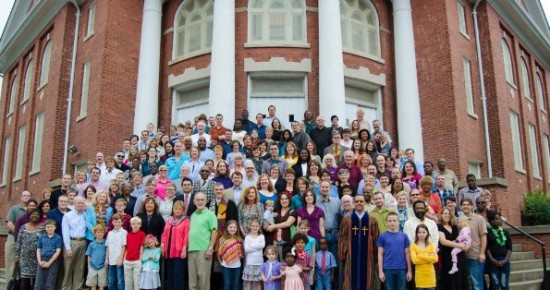 The church’s 18-member leadership council has requested that pastors conduct “relationship blessings” in lieu of formal marriages until the United Methodist Church, which also bans gays and lesbians from serving as clergy, changes its anti-marriage-equality stance. (It’s not clear whether these “relationship blessings” will be available to same-sex couples too, but one would assume.)

“On the matter of gay marriage, the church sees injustice in the legal position of state government and the theological position of our denomination,” the church’s spokespeople said in a statement. “North Carolina prohibits same-sex marriage and all the rights and privileges marriage brings. The leadership council has asked that their ministers join others who refuse to sign any state marriage licenses until this right is granted to same-sex couples.”

Situated in North Carolina, where 60 percent of the population voted to ban gay marriage via Amendment One last year, Green Street says they are an isolated example of LGBT acceptance in the local religious community, and it looks like it might stay that way:

“Green Street is presently the only reconciling congregation in the western North Carolina Conference,” the statement said. “With a growing number of LGBTQ (lesbian, gay, bisexual, transgender, queer) members, Green Street seeks to be a public witness to its community, conference and denomination.” …

“I don’t know that we are out to change anyone’s minds,” the Rev. Kelly Carpenter, the church’s pastor, told WFDD (88.5 FM) radio Friday.

As great as it is to see a gay-friendly church, I’m not convinced that this is a real solution. The idea is not new, particularly with regards to legal marriage; among other celebrity couples, actress Kristen Bell and her fiancé Dax Shepard refuse to wed until the legal right is extended to all couples, and Angelina Jolie and Brad Pitt made a similar vow a while back (though some gay rights advocates praised their recent decision to get married anyway).

However, straight couples holding off on marriage might send a different message than what LGBT activists are going for. The idea is that marriage is not something that can simply be put off until it’s convenient; it’s a deeply meaningful right that should be available to anyone and everyone.

Regarding Brad and Angelina back in April 2012:

“Marriage says ‘we are a family’ in a way that no other word can. It appears that even Brad and Angelina’s children understand the meaning of that special vow,” said Rebekah Orr, Communications Director for Equality California. “We would never want any committed couple to deny themselves and their families the happiness and security that marriage brings.”

Gay-friendly churches, especially, shouldn’t be using this strategy; already few and far between, churches that embrace LGBT families would contribute much more to the movement by actually marrying same-sex couples who want a religious ceremony. (It’s certainly not unheard of, even if those marriages wouldn’t necessarily be recognized by the greater church.)

When well-meaning straight allies put off marriage for the sake of LGBT people, they aren’t changing anyone’s minds. Instead, they’re conveying to anti-gay groups that marriage really isn’t that important, that marriage can wait, and that we’ll settle for inequality. And that’s the wrong message.

March 20, 2013 A Conversation with a Pastor Who Wants to Get Out of the Pulpit
Browse Our Archives
What Are Your Thoughts?leave a comment