In 2006, politicians in Kentucky passed a law requiring the state’s Department of Homeland Security to declare in its training materials that security was unattainable without reliance on “Almighty God.” It also required a plaque to be installed at the Department’s entrance saying as much. AA’s attorney Edwin Kagin called the law “one of the most egregiously and breathtakingly unconstitutional actions by a state legislature that I’ve ever seen.”

After a long, drawn-out court battle that involved a lower court victory, an appellate court loss, and a “we’re not getting involved” from the Kentucky Supreme Court, AA appealed to the United States Supreme Court. 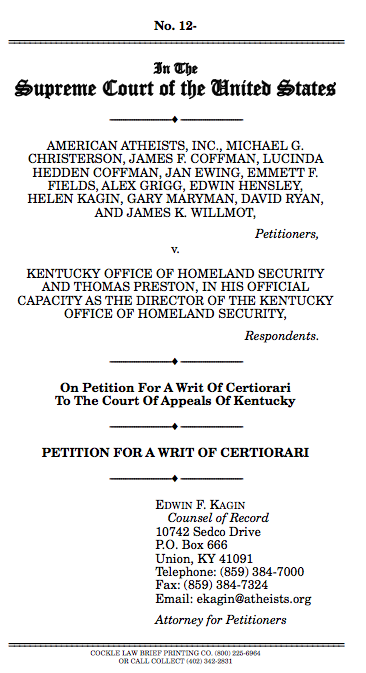 Yesterday, unfortunately (albeit expectedly), the Supreme Court rejected the request (PDF). They won’t hear the case.

When reached for comment, AA President Dave Silverman said this:

“We disagree with the court’s decision… Kentucky is putting a criminal penalty on a refusal to affirm to a god, and we maintain our stance that this law is unconstitutional. We are proud that we were able to raise awareness about this and we’re sorry the Supreme Court has decided to sidestep the issue. The people of Kentucky deserve better.”

March 19, 2013
A Simple Primer on How to Be Interesting
Next Post

March 19, 2013 You Can't Have One Without the Other
Browse Our Archives
What Are Your Thoughts?leave a comment