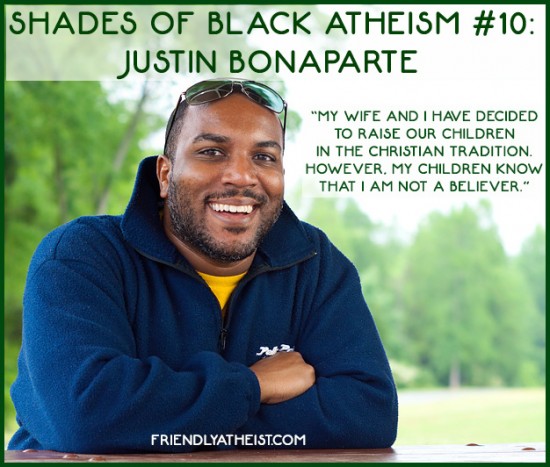 Justin Bonaparte, a 39-year-old Charlotte resident told me that he “was raised in a nominally Christian household.” He, along with his older brother, attended a K-8 Catholic school, but he feels that was because private school offered them a better education not because his parents sought to further indoctrinate them. He doesn’t remember a time when he would have referred to himself as a believer or Christian, but what he does remember are persistent doubts and questions about the religious rituals and the Bible as a whole. Justin’s family knows that he is an atheist and he believes his mother and brother are, too, although they’ve not had an in-depth conversation about it. I’ve noticed that those who were raised “nominally Christian” tend to not have spoken at length about their lack of belief with their families. I suppose because my childhood was completely saturated with all things Jehovah’s Witness it’s hard for me to imagine having not discussed these issues in-depth. I’m jealous of people who can maintain a relationship with their family without religion becoming a pervasive issue.

That being said, Justin’s wife is a Christian and was raised in a very religious household. He said:

… her family was heavily involved with church activities and her father is now a pastor of his own church. My wife and I have decided to raise our children in the Christian tradition (Christening, Christmas, etc); however, my children know that I am not a believer and I express my own opinion on religious/spiritual matters whenever possible. Our children attend church with my wife, as a social outlet, and they have bible study/children’s church regularly. We discuss things that they have been told or have heard in church openly, and as a skeptic, I usually challenge them as to how a particular event or story could have happened (though at 5 and 8, there are limits to their understanding of biblical stories).

Justin is the first atheist I have interviewed who has chosen to raise his children as Christians, but I know this is commonplace. When I married my husband, who is and was an atheist, he agreed to allow me to raise any children we might have as Christians. Fortunately, I was able to shrug off my theism so it never became an issue. I do have a biased negative opinion of raising children as Christian because, as an adult, I can point to specific detriments that belief in Christianity had on me. That being said, I was a happy Christian child and it made me feel secure at the time. I didn’t have a skeptical parent either, so no doubt Justin’s children’s experience will lead to a healthier outcome than mine. Justin did say that the black community is “more heavily invested in the church/religious matters than other races” and perhaps that factors into his choice to raise his children as believers.

On a personal note, he doesn’t feel that he has experienced much stigma as an atheist and doesn’t think the already small atheist movement should focus on subgroups. Rather, we should “concentrate our efforts on things that affect us all.” He is a member of a couple of Meetup groups in his area and is a member of American Atheists. He donates to the Secular Coalition for America, Richard Dawkins Foundation for Reason & Science, and other national groups. He ensures he is abreast of events in the atheist movement by following sites such as Freethought Blogs and this one.

I asked him if he had any advice for closeted black atheists and he said:

“There are people in situations where it would be potentially detrimental if they were to ‘come out of the closet’, in terms of their family relationships, job, social community, etc. I would urge closeted atheists to examine their situation and if possible, to be upfront and positive about their atheism.”

I fully agree. That’s part of the reason I promote smaller, more focused groups. Certain subsets of atheists like, for example, ex-Muslims face death when they choose to live honestly and I don’t believe the larger “atheist movement” is set up to address those special needs. He recommends reading Godless by Dan Barker and 50 Reasons People Give for Believing in a God by Guy P. Harrison.

March 12, 2013
There Are Homeschooling Christian Parents Who Accept Evolution, Too
Next Post