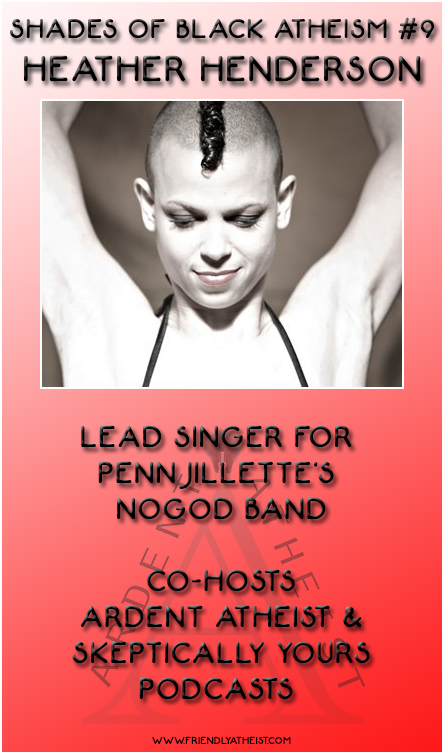 Heather Henderson is the lead singer for Penn Jillette‘s No God Band and co-hosts two podcasts, Ardent Atheist and Skeptically Yours. She also does a segment called “The News In Religion” for the Skepticality podcast.

Physically, Heather is certainly on the lighter side of the black atheism spectrum, but that doesn’t change the fact that she was born to a black father (who is an atheist) and went to a black Baptist church for some time. Heather’s mother was a Hungarian Jew, but ascribed to Christianity and that is how Heather was raised. Her father left the family home when she was ten, so her upbringing fell almost exclusively on her theist mother.

Heather was taken to church from the time she was born up until she was a teenager, when she told her mother that she was never going back. In her youngest years they went to a mostly black Baptist church, “the kind where people stood up and danced around and fell on the floor.” Eventually they moved to a church where the majority of the congregation was white and “the pastor was an ex-rock-n’-roller.” Heather stopped believing in gods at a fairly young age but still felt she was spiritual. She didn’t declare herself an atheist until much later in life. The catalyst was the film Zeitgeist, “a 2007 documentary film by Peter Joseph. It presents a number of conspiracy theory-based ideas, including the Christ myth theory.” It was that portion of the movie on the Christ myth that pushed Heather to think differently. Although she now knows about the misinformation the film contains, the movie got her thinking and researching. The Internet offered a plethora of information that resulted in her atheism, and a friendship with Penn Jillette helped her give up other supernatural notions like psychic phenomena and turned her into a bona fide skeptic.

Heather’s mother died when Heather was in her early twenties, so this was before she became an open atheist. She feels that, had she been able to share these things with her, that it would have been a positive experience. She has never spoken to her father about religion, adding, “he’s not mentally healthy so I don’t know if he would even be able to register, let alone remember, our conversation if I did tell him I was an atheist. Maybe I’ll still try.” Fortunately, Heather has an excellent support system in her significant other Emery Emery. She said, “he has helped me with my debating skills and keeps me on top of my game.” 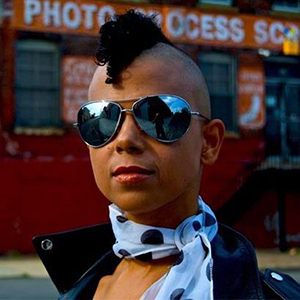 Heather’s Facebook page is open for anyone to post, debate, argue, and rant on the topic of religion. This, of course, lets in people who do not share in her views. I have been a witness to some debates and arguments there. She calmly puts up with a lot and hopefully also gets through to many people. I’ve seen her called a “half breed,” a “dyke,” a chill-girl, and a host of other derogatory names just because she chooses to live openly and honestly. I admire her for her patience and perseverance.

I was curious if Heather felt that the black atheist experience was different than others. She answered in the affirmative:

There are still so many African Americans who are stuck in the slave mentality their ancestors handed down to them. They don’t ask questions or wonder why there are laws for slavery in the Bible. They haven’t done the research about why slavery was allowed to continue for so long in the U.S.  They just follow what their parents and their parents before did: tradition. It’s sad.

That’s uncomfortable to read but U.S. blacks maintain a high level of religiosity for a slew of reasons and this very well could be one of them. Coming out of that type of environment makes the black atheist experience a unique struggle. For that and many other reasons Heather supports race-focused groups.

“Everyone wants to feel like they belong to a community that they feel they can relate to. Not everyone is comfortable being the only one who is different in a group. It’s important to bring people together with like minds and like cultures so that everyone can be included where they feel safe and comfortable.”

To closeted atheists, she said not to be afraid to come out: “There are many more like you than you realize.”

Heather is on Twitter and she was also interviewed on Skepticality Ep. 201 starting at around the 28:00 mark.

March 5, 2013
Muslim Boys Kicked Out of Church for Challenging Guest Speaker
Next Post

March 5, 2013 Some Rwandans Turn to Atheism After Genocide
Browse Our Archives
What Are Your Thoughts?leave a comment