Atheist Plans to Come Out at Prayerful Town Council Meeting but Gets Thwarted… February 27, 2013 Paul Fidalgo 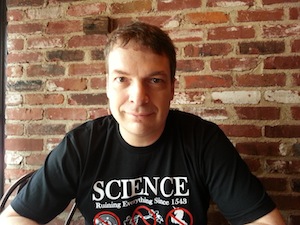 First: I know Michael Cluff through my mother and stepfather, who attended the same Unitarian Universalist church in South Jersey, a fairly conservative area of an otherwise blue state. Michael’s an atheist, and once introduced, he’s been in my circle of interwebs heathens. He’s been doing most of his online heresy under pseudonyms, as he’s felt the need to keep his atheism a secret to many in his community. Not everyone, as he is on the record as coordinator for the South Jersey Humanists. But still, his atheism has been on the down-low.

Second: Where Michael lives, and where I used to, Galloway Township, NJ, there has been a kerfuffle over prayer at township council meetings. As you can imagine, the council wants to keep up doing the God thing, and people who get why church-state separation is a good thing don’t. Even the major local paper, the rather conservative Press of Atlantic City, opposed the prayers at council meetings.

Michael decided to do something rather brave to fight on the side of reason, and he went to last night’s council meeting to out himself as an atheist and ask the council to vote down further prayer activity at council meetings.

Unbeknownst to him, though, the council voted on whether or not to continue to prayers before they allowed anyone to speak, and Michael never got his chance. (And yeah, they voted to keep on a-prayin’.)

I think he deserves the credit for what he intended to do, though. South Jersey is not a hospitable place for nonbelief in the way, say, the Metro-NYC area of North Jersey is. To make his crucial point about the exclusion of nontheists and minority religions, he was willing to put himself on the line in public. Last night, Michael posted the statement he would have given to the council on the South Jersey Humanists Facebook page, and I got his permission to repost it here. Thanks, Michael.

My name is Michael Cluff, and I’m from Galloway. It’s not easy to come out as an atheist in public, and especially here in Galloway. But I felt I had to comment on the motion to have prayer before these meetings.

I know, I probably don’t have a prayer here. Though I’m not in the majority, I know quite a few Galloway unbelievers. And we’re different from the angry stereotype. We’re good citizens of the community, raising our kids, paying our taxes, doing good works.

For a moment, I respectfully hope to show you a different perspective. In my view, the issue isn’t whether it’s legal to do this. It’s whether you should do this.

What we’re asking you to remember that when you pray here, you are praying as a public official.

Whether you intend to or not, when you use your role as a government official to pray, you’re sending a message. You’re suggesting that “believers are more equal than others.” You’re telling me I’m not really a citizen.

I’m not just talking about atheists and agnostics. Please keep in mind that not everyone in your town believes in the single, male god that appears in your approved prayers. With these prayers you’re telling those who go to the Galloway’s Hindu Jain temple — I don’t represent you. You’re telling those who go to Galloway’s Unitarian Universalist congregation: You aren’t really a resident here.

You might not mean to say this. You may feel it’s an innocent expression of personal faith. But you would be using your position of power in a way that excludes those who don’t share your beliefs.

Even worse, you would be doing your own religion a disservice, as you would be reinforcing the stereotype of Christians as hostile to other beliefs. And you’d be forgetting what Jesus said in Matthew 6:5:

“And whenever you pray, do not be like the hypocrites; for they love to stand and pray in the synagogues and at the street corners, so that they may be seen by others. Truly I tell you, they have received their reward. But whenever you pray, go into your room and shut the door and pray to your Father who is in secret; and your Father who sees in secret will reward you.”

Imagine an alternate universe with a town council run by atheists. Before every meeting, they recite a passage saying that we can only rely on ourselves and one another because God doesn’t exist. (Of course, they made sure the statement didn’t mention a specific god to make sure they could avoid “nuisance lawsuits.”) Even though I’m an atheist, I know that would be wrong.

So why not keep a moment of silence? That way everyone could gather strength and muster their faith in their own way. The only ones who wouldn’t be happy with that are those who are trying to use the government to advance a specific religion.

We all walk together as Americans: Christians, Jews, Hindus, Muslims, agnostics, atheists, wiccans, Unitarian Univeralists. Why shut us out like this?