There’s a show called “Belle’s” on TV One, a network geared toward African-American viewers. (We can add both of those to the List of Things I Learned Existed About Four Seconds Ago.)

On the most recent episode, Jil Cooper introduced her boyfriend Jack to her family. (Get it? Jack and Jil!) Just one problem: Jack is an atheist — something even Jil didn’t know about — and father Big Bill Cooper can’t deal with it.

(Neither can the show’s staff, apparently. A description of the episode reads: “Jill meets the perfect guy and invites him to dinner for an introduction to Bill and the family. His imperfection is revealed and Jill has to decide whether or not to continue dating him.”)

The relevant scene begins at the 10:23 mark below:

Big Bill Cooper: So you became an atheist when… after seeing some traumatic event covering the war?

Jil Cooper: Or maybe somebody dropped you on your head when you were a baby or something like that.

(Boyfriend) Jack: Actually, sir, it was a decision based on science, reason, and logic.

Jack: Just so I can understand this, so if I were a drug dealer or a bank robber, and I go to church and I confess my sins, you would welcome me with open arms?

Jack: But because I’m an atheist, I can’t be forgiven?

Big Bill Cooper: Because a drug dealer and bank robber can be saved.

Jack: And I can’t? I thought your God forgives everybody.

Big Bill Cooper: Oh, he does. And when he gets around to you, you come back and see me.

So we all know how this will end: Jil finds a way to understand Jack, Jack and Bill reconcile their differences, and everyone has a happy ending.

Oh, that’s sooooo not how this goes down.

After that scene, Jil confronts Jack about his atheism. She’s pissed off — irrationally pissed off, I might add. She berates Jack for attending a church service with her (“I love the music!” he says). He apologizes for not admitting his atheism earlier. They embrace. It looks like things are kind of resolved. Yay!

But after their kiss, she says to him, “If your heart worked as good as your lips, you’d be one hell of a man.” (Say WHAT?!) She wonders how he can love anybody if he doesn’t love God.

Then we return to subplot #2 some time after that scene. Big Bill Cooper comes back to comfort his daughter. He tells her:

“I got halfway home and I realized there was something that needed to be said. You know the most important thing in my life is seeing my children happy…”

Oh! We know where this is going! He’s gonna tell her it’s ok if she dates an atheist, because all that matters is that they love each other! Right?!

Big Bill Cooper: … I need to know: Are you so in love with that young man that life would be unbearable without him?

Big Bill Cooper: And you’re okay with that decision?

Jil Cooper: I am.

That’s the worst possible ending! What sort of lesson was learned?! Don’t date someone who relies on logic instead of nonsense? They never even gave him a chance to defend himself.

It’s not that a show couldn’t end this way… but I was at least expecting some sort of reconciliation between the atheist and religious characters (like that “Malibu Country” episode). There was nothing of the sort here. Not even an attempt. They never felt ashamed for stereotyping Jack as an “unsaved”-and-therefore-undateable guy. It was perfectly fine for the writers to throw the atheist character under the bus.

All of those would have been more interesting than what actually happened — dropping the storyline and just letting Jil break up with him for the “sin” of being an atheist.

It’s like the writers took a page from the Steve Harvey playbook. The television/radio personality once told Tyra Banks about the advice he gives to women searching for a good man:

You sitting up there talking to a dude and he tells you he’s an atheist, you need to pack it up and go home. You talking to a person who don’t believe in God… what’s his moral barometer? Where’s it at? It’s nowhere. You gotta get into this stuff.

*Hemant breathes out*… Ok. In the writers’ defense (and I say this from my limited understanding of black culture), they could argue that the plot is actually pretty realistic. That’s what happens in many black families and this show was just a reflection of that. Art imitates life, after all.

I guess I just hold out hope that good writers — especially in a sitcom — can see past bigotry like that and offer a more idealistic ending, showing the audience that there is indeed a way to deal with situations like these in a positive way. There’s a way for us to expand our level of tolerance, even when our prejudices seem unshakeable.

In this case, the writers took the most disappointing way out. For shame…

For what it’s worth, some of the commenters on the show’s website feel the same way: 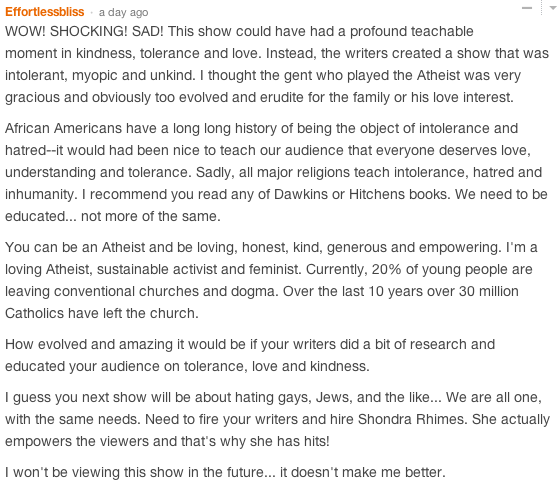 It would be wonderful if the writers returned to this storyline in the future and fixed their mistake. I don’t think it’ll happen… but I also didn’t think it was possible for a show to end like this.

February 25, 2013 Ask Richard: Atheist Mother: My Daughter is Going to Church
Browse Our Archives
What Are Your Thoughts?leave a comment