Pastor Robert Jeffress of the First Baptist Church of Dallas has said some amazing things in the past. 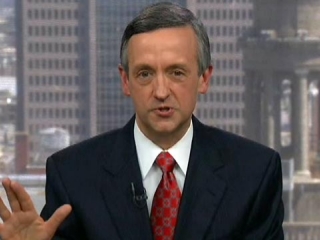 He called Mormomism a “cult” during last year’s Presidential campaign. (As if other religions were perfectly normal.)

He also said: “It’s a fact that [AIDS is] a gay disease so there’s a reasonable reason to exclude gays from the military.”

He once called Planned Parenthood a “slaughterhouse for the unborn.”

Then there was the time he warned other pastors that if they didn’t tell their congregations to vote for the “right” candidate, they were…

And we can’t forget the time he asked:

“Do we want a candidate who is a good, moral person — or one who is a born-again follower of the lord Jesus Christ?”

Somehow, NFL quarterback/bench warmer Tim Tebow knew about none of those things — or worse, he was fully aware of them — when he agreed to speak at Jeffress’ church this April. Now that the media is questioning why he supports a pastor who’s that outwardly crazy, Tebow has canceled his appearance there:

Tebow, announcing his decision Thursday on Twitter, said that he was canceling his appearance “due to new information that has been brought to my attention.”

Which was interpreted by Jeffress to mean Tebow has lots of personal problems going on in his own life:

“Tim called me last night and explained to me that because of some things going on in his personal life and his career he needed to steer clear of controversy right now, but that at some other date he would like to come and speak at our church,” Jeffress told CNN by phone from Dallas. “Tim has to do what Tim thinks is best for him right now.”

Yes. It’s totally not the fact that Jeffress is a homophobic bigot. It’s possible that Tebow privately shares Jeffress’ views considering he himself attends the First Baptist Church in Jacksonville, Florida… but a player like him knows better than to tarnish his public image by associating with (and tacitly supporting) someone emblematic of Christian hate.

If only he had said no in the first place instead of waiting until he got criticized for it.