The Laurel Leader-Call recently ran a front page story by reporter Cassidi Bush celebrating the first ever gay wedding ceremony in the area (even if the marriage is not legally recognized): 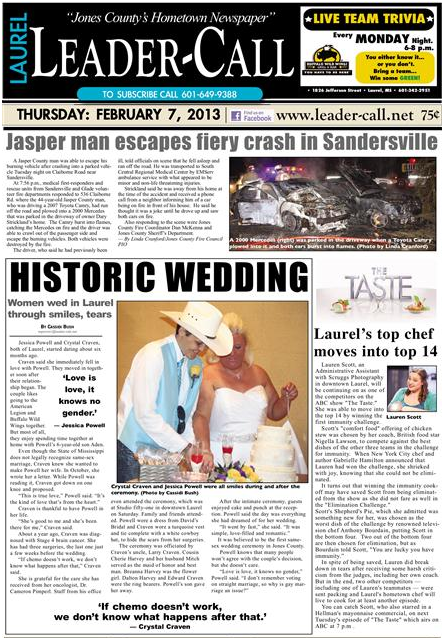 Just one thing… the paper is based out of Mississippi.

“The majority of people in Mississippi oppose gay marriage,” [owner Jim Cegielski] tells me, “but we didn’t know the reaction was going to be as vicious and hateful and as widespread as it was.”

“In the first week, before the backlash to the backlash, the calls were 100% negative,” says Cegielski. Two advertisers pulled their ads and 40 people canceled their subscriptions. (The 7,500-circulation paper is published Tuesdays, Thursdays and Saturdays.)

There’s good news, though. After Ashton Pittman (who previously exposed the ministry of anti-gay Christian pastor Damon Thompson) wrote about the backlash at Deep South Progressive, and Rachel Maddow tweeted about the story, the sympathetic responses began pouring in:

“Our phones have blown up ever since,” says the Leader-Call owner. “We’ve probably had 400 phone calls and 99% of them have been supportive.” The paper has added a new advertiser — a dog grooming business in Hattiesburg — and 100 new subscribers, almost all of them outside of Mississippi.

There are way more of us than them, and I’m glad the people at the newspaper eventually experienced the love instead of the presumably-Christian hate.

February 22, 2013 We Finally Have Proof of God's Existence!
Browse Our Archives
What Are Your Thoughts?leave a comment