Although 38-year-old Vance Salley of North Carolina is an atheist now, that hasn’t always been the case. With an Islamic father and a Catholic-raised mother, there was confusion growing up. He says now that although he believed in a “higher power,” deist may have been the most accurate description of his beliefs until he reached the age of 15. It was at that time that he became interested in reading about Egyptian, Greek, and Norse mythology.

“I began to think, if this is what all of these people believed to be true and they worshipped these entities as immortal beings and now we know them not to be real, shouldn’t the same hold true for the mythical beings in the Bible? So there you have it, I just shed all of my ideas about a god or gods.”

His disbelief in the Biblical God was consistently reinforced by the following (These are excerpts from an essay Vance wrote about why he no longer believed):

Human Arrogance — There are over 50 sextillion (thats 50 with 21 zeros after it) stars in the obsevable universe. A large portion of those stars  have plantetary systems around them similar or not similar to ours. In short the universe is a HUGE place. Do you honestly think that if there was a supreme being he just so happened to pick this planet “in the backwoods and boondocks of the Milky Way” to base the whole creation from. And then to say “He created us in his image”? This is arrogance and vanity.

“Emotional” God — If there were is a god that is supposed to be all-knowing and all-powerful, wouldn’t he be “bigger” than such human emotions as anger, jealousy, and revenge? Unfortunately, time and time again in the Bible, God has either “caught feelings” at something someone has done to him and decided to destroying men, women and children who had nothing to do with the offense but happened to live in the vicinity of said offense. “Grow up God quit being so sensitive!!”

“Racist” God — Throughout the Bible, God had certain groups of people that he liked and others that he cursed. Supposedly, Ham, the darkest of Noah’s sons was cursed. “Is God really that petty that he chooses certain people and doesn’t like others?”

“Pathetic Loser” God — He creates human beings with free will and dominion but tells them that they are to worship him? Why would an all-powerful being have to create creatures to worship him? Is he that much of a loser that he needs a boost for his self-esteem. Was he just lonely and needed someone to kiss his ass? If so then why not create a bunch of robots that did nothing but praise him all day?

“Magical Daddy” God — If you had never heard the story of Jesus Christ and I came up to you and told you that God came down from heaven and impregnated a virgin 14 year old girl who then gave birth to a baby who is actually God, grows up, does a bunch of miracles, gathers a following, is captured by the Romans, “sacrifices” himself for the good of our world and then comes backl in 3 days to go back to rule as God again in heaven you would probably say I’m crazy.

Vance’s family knows that he is an atheist and, fortunately, they support his right to voice his viewpoints. “It would stand to reason that they would because as a family we are all kind of different when it comes to the idea of the supernatural.” 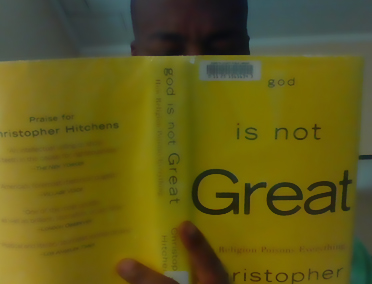 That being said, Vance recognizes that within the black community, such acceptance isn’t necessarily the norm. He went on to state that “the Black atheist experience is a little more complex than the white atheist experience. When you’re black and a nonbeliever you’re basically a minority within a minority. And you’re surrounded by people who are a lot less accepting of a person of non-faith. For some reason, faith in Jesus Christ in the black community is to some supposed to be a given.

“Everyone believes in God!!” is what you tend to hear. Most African-Americans are born into church life and raised in it without ever questioning what they are being told to believe. A friend of mine who is a believer told me that at her church one of the first things they tell children when they ask a question that might show the flaws in the Biblical doctrine is “Never question God or his plan” or “God works in mysterious ways so it is not for us to know why.” Grown people who are in charge of giving young minds information who would tell kids this is troubling to me.

Because of this and other reasons, he believes that the atheist community benefits from diversity focused secular, humanist, and atheist groups. Yes, blacks, women, and others fit inside the large well-established groups as well, but from time to time it’s okay to meet with people that you “connect with on the same level.”

February 19, 2013
As If a New Pope Actually Matters
Next Post