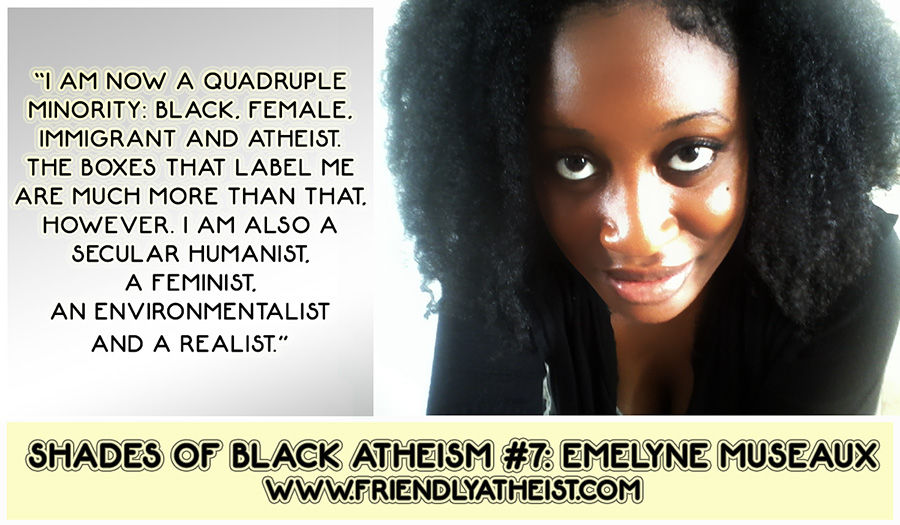 Born in Cap-Haïtien, Haiti, where only 1% of the population are “nones,” Emelyne Museaux was raised in the Catholic religious tradition, just like the majority of her friends and neighbors. She elaborated on this fact:

I’d been baptized as a baby and raised in the Catholic Church my entire life. I could recite the rosary by heart by age 5, I prayed twice a day and later, as an adult, attended mass 5-6 days out of the week. I was also a volunteer for my church’s youth groups, a member of the choir, and I even worked as a receptionist and translator […] Most Haitians are Christians, with Catholics being dominant among them, and even those who aren’t practice voodoo and believe in some type of supernatural entity. For Haitians, saying “I am an atheist” is synonymous with “I worship the Devil.” To say that you do not worship God must mean that you love Satan; for most Haitians, the idea that a person exists who doesn’t believe in the existence of either of these beings is unfathomable.

Emelyne’s first real moment of skepticism came when she was around nine years old and told her mother that she wanted to be a priest when she grew up. Her mother’s reply was simple: “Women can’t be priests.” Emelyne wasn’t ready to just take that answer at face value and asked why. Her mother told her to ask one of the priests at church, which she did. His reply was: “There were no female apostles; that’s why we don’t allow women priests.” The idea that Jesus would want to exclude women from such a position in his church was hard to swallow but his answer seemed to make enough sense and she eventually got over it.

As she grew older, more and more things bothered her about Catholicism, specifically, and Christianity in general, including the sex and financial scandals, the opulence of the Vatican, and the materialism of the priests and pastors. She kept telling herself that “God worked in mysterious ways” and that these individuals were only bad seeds. 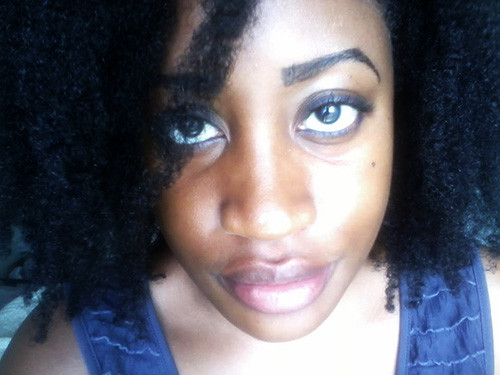 “I’m not exactly sure when it happened, but I became more and more critical, more and more skeptical of my religion and those who practiced it.” When she started working for her church and saw the inner workings of it, also dealing more directly with kind, struggling church members, her negative feelings grew. Her church attendance started to wane and she felt she needed “a bit of space from religion.”

“I was sure that religious institutions, and not the Bible, were the problem, and to prove it, I decided to read the Bible, cover to cover, on my own.” She said that for the first time she wasn’t just focused on the light-hearted, hopeful excerpts — she was literate and had strong reading comprehension and critical thinking skills, after all, and very quickly realized what “a deplorable piece of fiction the Bible really is.” The Bible contains, in her words, “a fictional god character who is a sadistic, xenophobic, homophobic, misogynist[ic], homicidal ego-maniac and a devil character whose only crimes were not wanting to worship this being and trying to enlighten humanity.” Still, she’d been a theist for a long time and the idea of a creator God was so deeply ingrained in her that she decided to give other religions a chance. Fortunately — or unfortunately depending on your perspective — the Qur’an, the Talmud, and the Bhagavad-Gita all yielded the same results.

I felt duped, cheated, swindled and betrayed. Everything that I’d once believed was a lie and although I’d been able to overlooked the deception for years, it was as if someone had just highlighted that lie for me to see for the very first time. The more I thought about the silly things that I used to believe, how I’d never heard anything but my own thoughts when I prayed, how over 25,000 children die of preventable disease worldwide, everyday, and all the natural disasters in our world, I felt so foolish. When I realized how fragile, diverse and finite our lives, our world, are universe really are, I felt humbled, truly humbled.

Emelyne now refers to herself as “a quadruple minority: black, female, immigrant and atheist.” She said, “the boxes that label me are much more than that, however. I am also a secular humanist, a feminist, an environmentalist and a realist.”

Her family is aware that she is an atheist and, having always been the black sheep, her loss of faith is mostly see as her normal “weirdness.” Most family members ignore it for the most part, but the most devout members either proselytize whenever they see her or have shunned her, she said.

Emelyne doesn’t feel that the secular community needs race-focused groups, but more attention needs to go to charitable giving. (If you are interested in this, check out Foundation Beyond Belief.) She feels “infusions of race, nationality, or gender-based groups” makes the community more political and “is taking baby-steps in the direction of a religious-esque movement that could hurt the cause more than help it.” That being said, she supports local secular charities and is involved in a few online atheists groups and is the founder of one. She’s a co-host on a Blogtalk radio show with Black Freethinkers and she writes anonymously for an atheist blog.