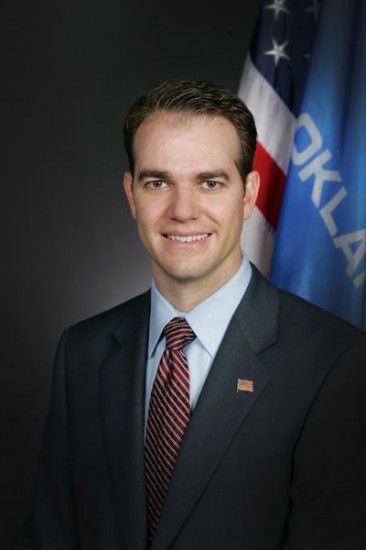 In 1909, Oklahoma enacted a law prohibiting blasphemy, and it stands to this day. But if a new bill from Republican State Representative Randy Grau is passed and signed, that law will be thrown into the dustbin of history.

“Part of my goal is to get rid of unnecessary laws,” [Grau] said… The measure, which passed [the House committee] 6-4, would remove blasphemy as a misdemeanor…

“I am not pro-blasphemy,” Grau said. “I’m for everyone to freely exercise their religion. But that law prohibits the free exercise of religion as well as free speech. Under that law, you could be convicted of a misdemeanor for making fun of another person’s religion. Now, again, I don’t support going around disparaging other people’s religion, but it’s not a crime.”

Rep. Grau is no atheist, far from it. From his campaign website:

Our rights do not come from government, but instead, they are given to us by God…

My Christian faith guides my values in my public and my private life.

Charles Pierce at Esquire, late last year, noticed Grau’s work on this issue, and revealed that Grau was troubled by the protests in the Muslim world over the “Innocence of Muslims” video. But don’t get too excited — Grau also supported bills supporting the non-existant threat of Sharia law in Oklahoma and requiring doctors to perform particular exams on women who want a prescription for abortion-inducing drugs.

It’s interesting times in Oklahoma, considering the recent interest in atheist activism in the local media.

Anyway, HB 1088 will next be considered by the entire House. Its fate is anyone’s guess.

February 12, 2013
Can a Gay Man Really Be a 'Close Friend' of the President of Chick-fil-A?
Next Post