A group of Christian students (and their parents) from Sullivan High School in Sullivan, IN‎ don’t want to go to their own prom… because gay students are allowed to attend.

So, yesterday, they gathered at First Christian Church to make plans for an alternative prom that would ban gay students: 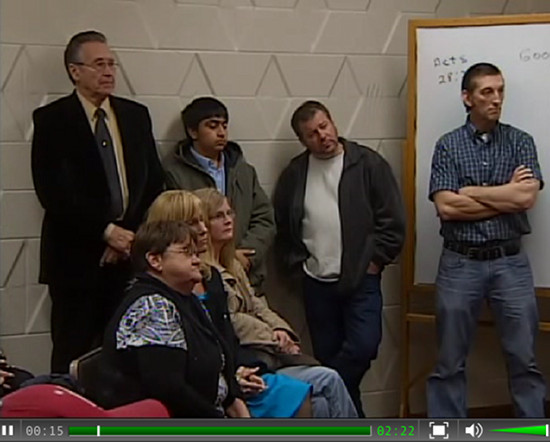 Their idea is to create a [separate… traditional prom]. Students say there are several others from their high school who agree, but are afraid to take a stand.

“If we can get a good prom then we can convince more people to come and follow what they believe,” said student Kynon Johnson.

And now they want everyone to know where they stand.

“We want to make the public see that we love the homosexuals, but we don’t think it’s right nor should it be publicly accepted,” said a local student.

“Christians have always been prepared for a fight. Jesus gave us armor for the front, not the back; we’re not running anymore,” said Bill Phegley with Carlisle Church.

I would love to know what they all think is going to happen at a prom that allows gay students.

Who knew you needed an alternative, Christian-created, no-gays-allowed prom in order to grind against the wall with your date?

It brings to mind what happened to Constance McMillen three years ago when her school canceled prom for everyone just so she couldn’t attend with her girlfriend.

The bigots have a Facebook group called “2013 Sullivan Traditional Prom” where members go to great lengths to convince people they’re not haters — they just want to make life miserable for gay students, especially ones who have the audacity to hold hands and smile and make themselves known in public:

Our first suggestion would be that the school administration ask the same sex couple or couples not use this venue (the Grand March) to demonstrate their sexuality because it is offensive to many and would be demonstrating before minors. So our wish is that the school officials and board return to the traditional couple stance in the same way Indiana only accepts traditional (man and wife) marriages.

We encourage you to show support for the teens in our community that are standing up for what they believe is right. Their position is based on the Bible’s stance against homosexuality and its acceptance in society and in our schools. It is very difficult for many of our high schoolers to stand up against peer pressure, our permissive culture and main stream media and yet many teens are standing up concerning this blatant demonstration that is not in accordance with God’s Word.

Please keep in mind that we love those who participate in homosexuality but that does not mean that we love homosexuality. Just as it has become their civil right (according to our society today) to attend the Grand March as a homosexual couple, it is our teens right to speak out against such a public demonstration. Many believe, as our teens do, this is not the venue to demonstrate a homosexual lifestyle.

You have to appreciate how honest that phrase is: “according to our society today”… If these Christians had it their way, in other words, LGBT people would never have gotten civil rights in the first place. But if the “law” says they have to be treated “equally,” then the Christians will just avoid them at all costs.

It’s like that one time Jesus said: “What?! There are people who don’t agree with my beliefs? Fuck that. I’m outta here.” (It’s in the New Testament somewhere, I’m sure.)

We would like to stress to everyone that this is not a hate group. We do not hate anyone, we are not judging anyone. We are choosing to stand on the word of God. The bible says the truth will set you free. All we can do is stand for what we believe and let God do the rest. We will not judge or hate anyone for their choice. We simply choose the entire word of God. The unchanging living word of God. God is the same yesterday, today and forever.

Yes, they love gay people so much, they’re gathering at a church to figure out the best way to celebrate the end of high school without those damned gay kids getting in their way.

Our position concerning the SHS Grand March is we believe that the student body was not given the opportunity to voice it’s opinion concerning same sex couples.
A petition was started and passed around by a few students in favor of same sex couples attending the Grand March. The petition was not pre-approved by the school prior to its circulation. Some students who chose not to sign the petition were called into the office and were told to be quiet about it. The students were told to “drop” the issue, then it was approved.
The school did not allow the community to have a say or an opinion in the matter.

Apparently, AJ Doffing believes that civil rights should be put to a vote of the student body. Which would theoretically also open the door to voting on whether black students or Hispanic students or atheists or Jews should be banned from attending prom.

But they would never do those things. Because that would be hateful.

Don’t forgot about the meeting today at the first Christian Church at 1:30! We need to get as many parents and students there as possible to really make this a go! Come in through the back doors hope to see everybody there:)

Oh, Christians… sometimes, you make my job so easy…

The school can’t really do anything about this since they have to open the prom to all students — right now, administrators haven’t made any public statements.

So what can you do to help? Email SHS principal David Springer or Superintendent Chris Stitzle and tell them to voice their unwavering support for an inclusive prom no matter what happens in this case. LGBT students need to know they have the support of the adults in the district even if some of the students and their families are lost causes.

And here’s one’s for all you “not all like that” Christians out there: Sullivan First Christian Church needs to hear from Christians who think it’s wrong — who think it’s un-Christian — for a Christian church to serve as a meeting place for a hate groups that exists only to exclude LGBT adolescents from a milestone like prom. Sullivan First Christian’s contact page is here. [Their] phone number is 812-268-4348. Give ’em a shout.

(Thanks to Meg for the link!)

February 11, 2013 The Pope Pulls Out
Browse Our Archives
What Are Your Thoughts?leave a comment