I’ve been eager to post this interview with Regi Metcalf because he feels quite differently than I do about race and diversity-focused groups. This is, after all, about the “shades” of black atheism. Although most agree that black culture has an especially high level of religiosity, we don’t all agree on how to counter that, or if it’s even necessary to. 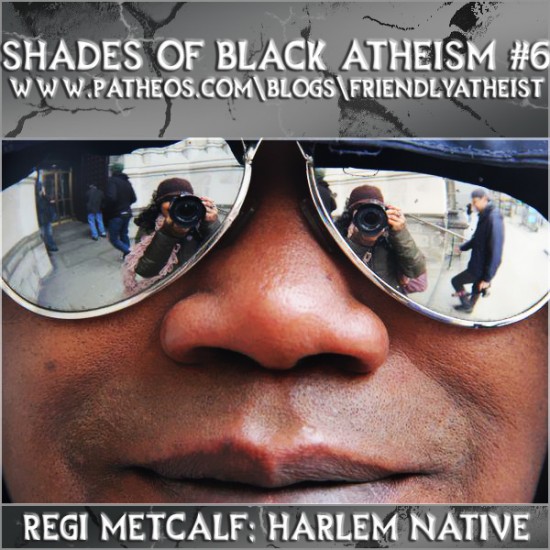 Regi was born in Harlem 55 years ago to a working class family. Raised primarily by his mother after his parents divorced when he was very young, his father remained in his life. He remembers not being very religious, even though his neighbors and other relatives were. That being said, he clearly recalls three specific experiences that helped form his views on religion.

The first was during his pre-teen years. Every year he’d visit his great uncle and he, along with his brother, would be brought into a room and receive a lecture on the importance of believing in God. Regi’s sister was pointedly excluded from these conversations. “Famously, at some point, he would unbutton his shirt and show us his graying chest hair and tell us that God didn’t punish or persecute non-believers but only helped those who asked for his help, all others were on their own.”

The second experience involved a neighbor (also the landlord) who lived upstairs. She was a very religious woman who was the matriarch of a very large, middle-class family. She acted as a kind of foster grandmother for Regi and he even remembers her coming to his mother’s aid when she was ill. She only took Regi and his siblings to church for a short while, but it made an impression.

A visit from Jehovah’s Witnesses stood out in his mind and is the third event that contributed to his ultimate view of religious belief. In an effort to get rid of the JWs, Regi’s mother stated that she had “mixed emotions” about religion. He said, “I think it was the first time I’d ever heard that phrase and it stuck with me as a way to describe my own feelings up until the last decade or so: unpersuaded by religious mythology, but nagged by tendencies to superstition and magical thinking.”

A few years ago Regi “came out” as an atheist on Facebook. He said he was free of religion. His mother, who in later years has become a Christian fundamentalist, asked him about it because she didn’t know other atheists. She has accepted his lack of belief and he has no desire to change hers.

Regi thinks that the black community is more religious than most. He stated:

[It’s] on a par with many newer immigrant communities (Latinos, Koreans, Middle-easterners). It’s also a truism that religion has played a starring, vital role in the liberation/civil rights struggle for African-Americans and Latinos. Religion has been a “faithful” friend (pun intended). So, there is a sense of “betrayal” to our history and community that comes with a rejection of religion that non-black secularists don’t share, at least not in the same way. There’s a potential separation from our fellows in “the struggle” (and our heroes: MLK Jr., Desmond Tutu, et al.) that might be used against us all by those who would seek to further “divide and conquer” our communities. But, just as any technology or single avenue of resistance (black leather jackets and rifles) becomes obsolete at some point, so do belief systems.

I hope he’s right about the church becoming obselete — at the very least, I hope it releases its stranglehold on the black community.

I asked Regi if he felt “the secular community needs race-focused groups.” He didn’t care for the phrasing of the question. “It seems to suggest that secularists should perhaps target ‘minority’ communities in some sort of way.”

Yes, that is what I’m suggesting, I told him.

He stated further that he “wouldn’t like to see that, it opens the door for all kinds of condescension (or accusations of same).” I agree, but I don’t think that should stop us. He feels that all secular people/groups need to become more visible in their communities.

“Borrowing the term ‘coming out’ is perhaps just right. Just as the black community (and especially the black church) is just starting to come to terms with homosexuality (e.g., the President’s ‘come to Jesus’ moment on marriage equality) so a more visible black secular presence will force [the] black religious to deal with reality, which is always a good and necessary thing.”

I agree that most secular groups need to become more visible, but I also feel that groups focused on a subset of atheists can also be very helpful. The female atheist, the LGBT atheist, the black atheist all have specific struggles that might be better addressed in groups that focus on those struggles. They can serve as a bridge to groups with a larger focus. Still I respect Regi’s opinion and it’s a sentiment shared by many.

Regi stated that he’s not heavily involved in the secular community but he’s “liked” and read information on the Black Atheists of America and The Friendly Atheist Facebook pages.

In closing, he stated, “Coming to rationality was a long, arduous, very personal process for me. It didn’t involve a lot of reading or any revelatory experiences. For me, it really comes down to what makes sense to me and what makes me feel best and function at my best. I think, ultimately, that’s what being religious or religion-free comes down to for anyone.”

February 5, 2013
What Would Jesus Say To Ellen DeGeneres?
Next Post