Last night, the local Fox News station in St. Louis featured this story (they did not use the term Tipocalypse, but, you know, it’s probably just a matter of time before it catches on) on their nightly news:

Fox2 has the story of the debate that you might say has reached a tipping point.

Anyway, this is what Pastor Alois Bell said for her actions:

It was just dumb!  It was dumb of me.  I can say that because I take responsibilities for all of my actions.

And in regards to getting the waitress fired:

I told the man, I’m like “Hey, I didn’t want…*sigh* I didn’t want this to happen, I just want you to know that this may be happening at your store…“

And, finally, an actually apology:

I’m sorry that I wrote it.

But the part that gets my goat is that this Sunday, she plans on delivering a sermon on forgiveness and redemption. Forgiveness and redemption?! Not “charity”? Not “be kind to your fellow human beings”? Not “Whatsoever you do to the least of my people, that you do unto me”? You’re giving a sermon on how everyone should just forget this and let you move on with your life?

But, in other news, there has been some really positive response to the whole controversy. Like this receipt left on a table by (I assume) an atheist: 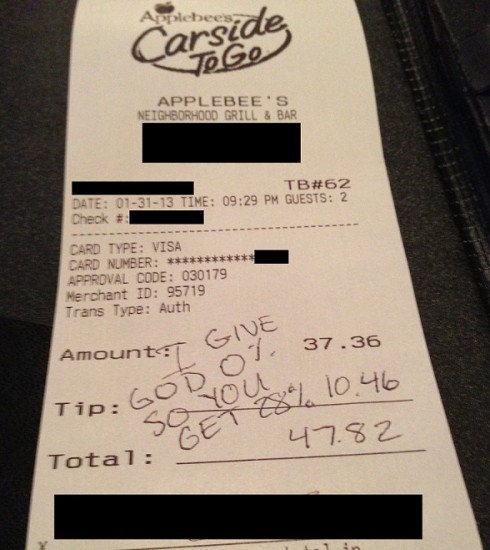 Let’s see more of it!