Sorry about the title… I’ve just never dubbed an “apocalypse” before and I saw an opening and went for it!

Okay, if you didn’t read this post, here’s a quick catch-up:

Chelsea Welch, a server at Applebee’s, submitted this picture to Reddit on Tuesday: 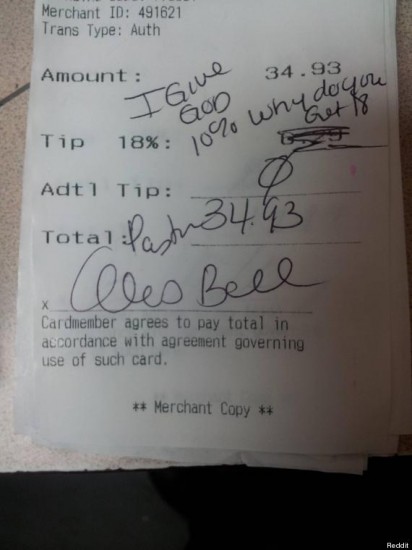 The pastor in question got wind of this, called the restaurant to complain, and got the server fired.

Now, the pastor, Alois Bell has come forward to air her side of the story. 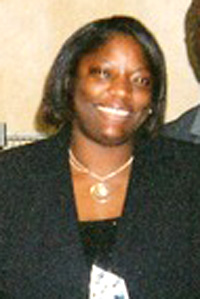 “My heart is really broken,” said the 37-year-old Bell. “I’ve brought embarrassment to my church and ministry.”

Yeah.  It was a crappy thing to do.  You should be embarrassed.

Bell, seen above, said her notation on the receipt was a “lapse in judgment that has been blown out of proportion.” Despite scratching out the tip added to the bill, Bell claimed that she left a $6 tip in cash, adding that she subsequently discovered the 18 percent gratuity had been charged to her credit card.

My gut tells me that she did not actually leave cash, but I have nothing to base that on except to ask why she would protest tipping 18% and then tip 20%. Also, if she was charged that tip automatically, then she needs to take it up with the restaurant, because it was beyond clear that she was not tipping the waitress.

And, even if she did leave cash on the table, that does not make the comment any less rude and petty.

In a follow-up conversation with an Applebee’s manager, Bell said she was told that the waitress was immediately terminated.

According to The Consumerist, the receipt was not uploaded to Reddit by the Applebee’s worker who waited on Bell’s party. Instead, the server showed it to waitress Chelsea Welch, who photographed the receipt and later shared it online. Welch told The Consumerist she was fired yesterday. In a statement, Applebee’s spokesperson Dan Smith reported that, “Our franchisee has apologized to the Guest” for violating the patron’s “right to privacy.” The individual responsible for the leak “is no longer employed by the franchise,” Smith added.

Bell’s webpage is blowing up with some pretty nasty feedback.

While I don’t wish the wrath of the Internet upon anyone, I can’t help but feel some schadenfreude at the backlash she received.

As I said before, I was a server for a long time, and I work in customer service currently. The way people in the customer service industry are treated is abhorrent. I can’t pretend that there haven’t been a couple (hundred) people that I would have liked give a verbal smack-down after talking down to me, stiffing me, yelling at me, telling me that I was stupid, hanging up on me, telling my manager that I need to be fired because their salad didn’t come with the dressing on the side… the list never ends.

When that kind of attitude is coming from someone who is supposed to be the moral compass of her congregation, someone who is a leader of her community… I just can’t bring myself to feel bad for her “broken heart.” But maybe this just hits too close to home for me.

Thoughts?  Did she get what was coming to her or was it a stupid flub that we should just get over?

January 31, 2013 Alber Saber's Appeal Denied, His Whereabouts Unclear
Browse Our Archives
What Are Your Thoughts?leave a comment