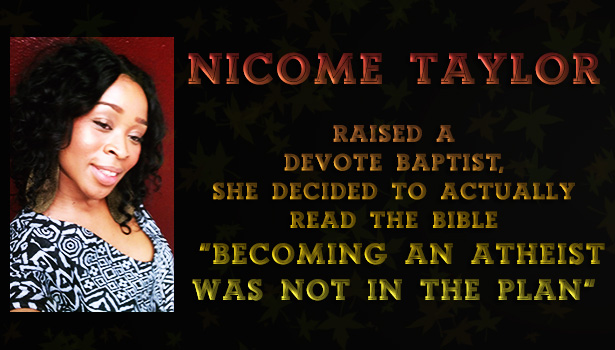 Nicome Taylor is a California native, with a religious background rooted in the Baptist Church. Now 30, she admits that this type of upbringing had a great impact on her worldviews especially during times of hardship. Her grandmother’s principles and values were heavily influenced by the Bible and her southern roots laid the Christian foundation that would be adhered to by her children as well as her grandchildren.

Nicome’s mother battled with kidney failure, so having faith in “God’s promise” of an afterlife played a significant role in her life. Knowing that her mother’s condition was temporary, that in the next life she would be pain-free, she had peace of mind. When Nicome was only 17 and her mother passed away, this is what she clung to. Still, like so many theists, she struggled to understand why God would allow her mother to die instead of healing her illness.

Nicome remembers: “I would always resort back to what I was taught about God having a will of his own that reached far beyond my own understanding. [Still] it didn’t make any sense that an all-powerful being displayed such powerless capabilities.” Fearing those critical thoughts, Nicome began a journey that she thought would lead her to be “A True Christian.” She hadn’t actually read the Bible and figured she should since she wanted to be able to defend it.

“Becoming an Atheist was not in the plan,” she said, but the more she researched the topic the less it appeared to be true. Reaching a new level of understanding made her more consciously aware of the world around her and helped her gain a greater appreciation for the life that she currently has since it is the only one that she is certain exists.

Nicome has informed her family that she is an atheist and she even made an effort to have one-on-one conversations with them. Some were very surprised by her commentary when it came to religion being created by mankind and that it all traces back to mythological beliefs that have been passed down over centuries. Other family members found that believing in something without properly investigating the claims really didn’t make a lot of sense and they understood how she came to her current position. Some of these discussions turned into heated debates which caused a temporary distance between her and various family members, but over time reconnections were made and Nicome was reassured that there was no love lost because of her atheism.

The fact that they continue to consider me to be a positive loving person even without the belief in a God made our relationship sustainable. I’m sure some of them may still believe that I will burn in hell for my lack of belief, but it doesn’t bother me as much anymore because I’m confident in the odds of it not existing. Even if it did, I would still be without fear because it would be out of my control.

What believers do not understand is that you can’t be granted with the freewill of choosing what to believe while at the same time being forced to believe what a god wants you to believe and being condemned for it. That makes god look like a real asshole. Clearly if an all knowing god knows what it would take for each individual to believe that it actually exists then it would demonstrate itself in a manner that would leave no doubt.

Although Nicome’s current partner is also a black atheist she stated that there have been challenges. She wanted to remain open-minded about potential life partners, but soon discovered that it would be problematic down the line to date a believer especially if children became part of the equation. It was slightly uncomfortable and difficult dating others who held on to the notion of gods because her responses in many conversations would be considered “offensive.” She was pleased when she found someone who could relate to her lack of belief. She said that their connection reaches beyond their agreement on the subject, but it makes it ten times easier considering the disputes that come with adverse worldviews.

The black atheist experience may differ from non-black atheist to a certain degree due to different levels of values, backgrounds and upbringing. There are some non-black atheists that have very similar stories to many of us in the black atheist community depending on how they were exposed to religion. What makes the majority of black non-believers different from other ethnic groups is the percentage of our culture that are religious. Neha Sahgal and Greg Smith stated in the article “A Religion Portrait of African Americans” listed on The Pew Forum On Religion & Public Life that “while the U.S. is generally considered a highly religious nation, African-Americans are markedly more religious on a variety of measures than the U.S. population as a whole, including level of affiliation with religion, attendance at religious services, frequency of prayer and religion’s important to life. Compared with other racial and ethnic groups, African-Americans are among the most likely to report a formal religious affiliation, with fully 87% of African-Americans describing themselves as belonging to one religious group or another.”

When she came across these figures, she wasn’t surprised. Most blacks that she comes in contact with make the assumption that she is affiliated with religion — usually Christianity — simply because of her skin color. Nicome and I agree that often times in the black community we’re expected to belong to a church, attend church, or plan on being in somebody’s church by Sunday morning.

As an out of the closet Atheist, this becomes off-putting after a while because it usually leads to a conversation about “Why don’t you believe in God?” Nicome said that she doesn’t mind responding to the question, but the after-effects of the conversation is what will determine how someone views you as an individual. She further stated that, “Many African-Americans find it insulting to our ancestors who carried the belief in God as they struggled their way through horrific stages throughout history. It never occurs to these same people why a God would allow these forms of adversities to exist in the first place.”

Nicome reflected on the fact that there are so many black secular historical figures that are not recognized as such, like Zora Neale Hurston, Frederick Douglass, Langston Hughes, and A. Philip Randolph, who focused more on humanistic viewpoints as opposed to theistic perceptions. Some people are more flexible than others and try not to have biased opinions when it come to certain matters, but that is much easier said than done. In many cases, folks automatically assume that one must “be a devil worshiper or upset with God” if they do not believe in a God.

Next, I asked if Nicome felt the atheist community needed race or diversity focused groups and she answered in the affirmative. 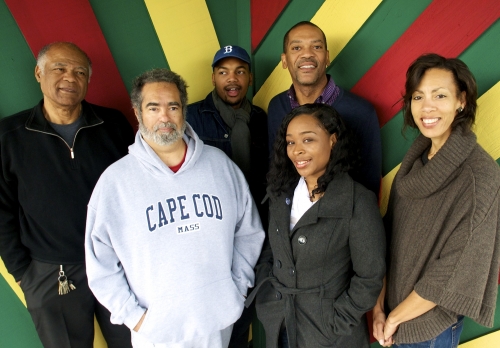 The secular community does need race-focused groups in order for people to be able to feel comfortable around those they feel can relate to their experiences, concerns and communities. I am a member of Black Skeptics L.A. and I must say that the journey thus far has been amazing. When I found out that this group existed there was a sense of automatic comfort that came with my desire to join.

They are people of color?!

They are Skeptics/Atheist/Agnostic/Freethinkers etc? And they are in L.A.? Count me in! I was excited to meet others who made me feel welcome and not alone in the thoughts that I had regarding religion. It is no secret that this is one of the reasons why we have been able to reach out to others within the community. I’m sure there are other secular groups that offer a similar level of comfort, but to my understanding not as much as those who have made their way to race structured groups.

Having spoken with other black non-believers who visited other atheist groups that were predominately white, Nicome stated that their experience was much different (though not necessarily worse) than members of a secular group who identified with their cultural background. She feels there is a way that we all can collectively work together in the secular community as a whole, but to ignore the degree of comfort that people feel within race-focused groups would be dishonest. She remembers that one of her cousins made a comment at one of her family gatherings that “atheism was a white man’s religion” when he found out that Nicome was an atheist.

This in not uncommon (see Acting White) and it’s a major reason why being a black atheist is difficult and unique. It also helps to explain why some choose not to tell other blacks they’re atheists. Of course, Nicome then had to explain why atheism is not a religion as well as share some history on how black people were introduced to Christianity by white slavemasters, and this sparked a few interesting concepts regarding what and how black people respond to information that they never heard of or are not fully aware of. Nicome feels that there is no denying the relaxation that many black people feel when discussing certain subjects with each other when non-blacks are not present. It is the “safe place” that many cultures look for when speaking freely about matters that only that particular group of people may be able to fully relate to.

I’ve had a great experience helping with the development of BSLA and am looking forward to our future plans within the community. I’ve met some really nice down-to-earth people whom I consider to be extended family in many ways. We provide a welcoming format to those who would like to take on an active role with the group’s projects and goals.

In addition to the business aspect: we promote fun activities for those who would prefer to just meet and mingle with those they can relate to. From the bowling and movie nights to our thought-provoking book club meetings — there is something for everyone. I love engaging in discussions with my fellow BSLA members because it produces different outlooks from a multiple perspectives. Those matters where we do not see eye-to-eye can be insightful and enhance our desire to challenge each others position. No matter if we are discussing politics, religion or just life itself, it’s always a pleasure being around them. I’m looking forward to working together on our scholarship fund for students within the LAUSD, 2012-2013 school year.

Nicome shared her advice to closeted black atheists: “Be comfortable being who you are and know that you are not alone.” It can be difficult, being a minority within a minority group and coming out to friends and family. Risking the social disconnection that comes with being honest can be challenging, but it’s worth it in the long run. Only you know when the time is right for you. She suggested finding a support group within their area or online that can help alleviate the discomfort of not being able to fully express yourself.

January 28, 2013
Dan Barker to Debate Whether There's Life After Death
Next Post