Yes, There Are Atheists Who Are Anti-Abortion January 25, 2013 Hemant Mehta

Yes, There Are Atheists Who Are Anti-Abortion

Given how strong the ties are between religious conservatives and the anti-abortion movement, you might suspect that atheists are almost entirely pro-choice… and you’d be right. However, a vocal minority of pro-life atheists have been getting a lot of coverage lately as people realize we’re not as monolithic as we’re made out to be.

Marco Rosaire Rossi wrote about non-religious pro-lifers for The Humanist last fall (and one of the groups he wrote about offered a rebuttal to his piece here). 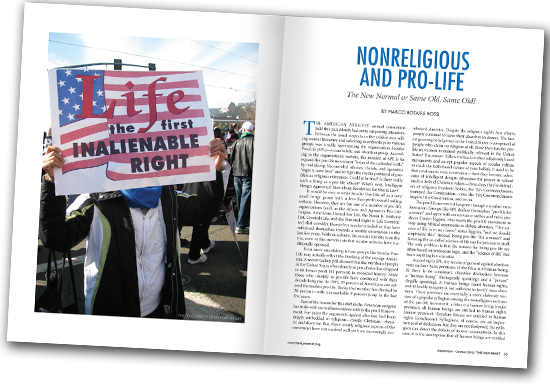 Now, Leslie Fain at The Catholic World Report takes another look at this group to find out how they justify being pro-life when God doesn’t factor into the equation:

According to SPL member Julie Thielen, who identifies as a gnostic antitheist atheist, the best ways to reach secular people with the pro-life message are through biology and an appeal to human rights.

“When the sperm meets the egg, a genetically complete human being is formed, and all that is required for maturation is time and nutrition,” Thielen said. “As complete human beings in the most vulnerable stages, there should be protections afforded. As a society we are judged by how we treat the most vulnerable — the young, the aged, the infirm, those who can’t speak for themselves. The unborn belong here.”

[Journalist Nat] Hentoff encourages anyone who wants to find secular information to support the pro-life argument to read works written by doctors who operate on babies in utero. “Read them in terms of what they do — surgeons who deal with the child before the child is actually a child, according to the law,” he said.

Being an atheist pro-lifer often can have its costs. Hentoff has lost lecture-circuit jobs and the opportunity to have a journalism school named after him and was delayed in getting a Lifetime Achievement Award from the National Press Foundation because of his pro-life views. “Being pro-life has cost me a lot, but these are losses I am proud of,” he said.

Perhaps the most interesting part of the article was finding out that some Christians have shunned the atheist pro-lifers because the “sanctity of life” is their issue, not the atheists’.

Rossi’s article offers a far more nuanced take on the groups, though, and raises the questions that Fain never asks.

January 25, 2013 This Just In: Religion Doesn't Make You More Generous
Browse Our Archives
What Are Your Thoughts?leave a comment