Wes Breedwell, a seven-year employee of a Nashville music venue and Christian youth facility called Rocketown, was fired from his job this week for wearing a pro-gay t-shirt.

The shirt is from the band Hostage Calm and reads “I Support Same-Sex Marriage” on the back, according to a picture Breedwell posted on Instagram. He wrote:

“Got fired from Rocketown today. Social media is what did it. So here is a picture to show my support for equality and free speech including social media. Cheers to my friends for having my back through all of this. #sevenyears”

According to the document listing his offenses, posted by the blog PropertyOfZack, Rocketown cited “lack of judgment” as the reason for Breedwell’s termination. They told him it was imperative not to share beliefs at work that “contradict the mission.” 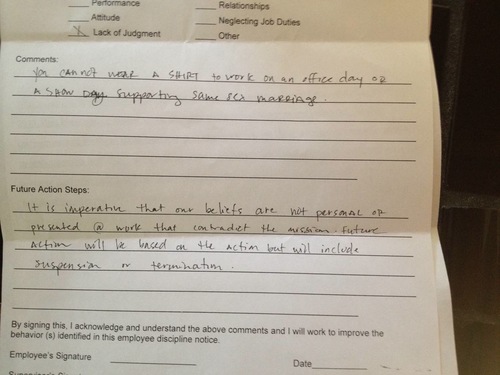 The band Hostage Calm also reached out to Breedwell. Upon speaking with them, Breedwell revealed that he had previously been passed up for promotions and salary raises because he didn’t identify as Christian. The band has pledged never to play at Rocketown again. Writes Hostage Calm’s Cmar as a response to the incident:

This shirt represents an idea that all people have the right to live their lives without being told who to love and whose love is more valuable. It represents equality under the law. It represents the freedom to choose.

And by the way: this all happened on MLK Day. Not that there’s a better day to fire someone over their support of civil rights… but the symbolism is clear. We still have a long way to go.