Shades of Black Atheism #4: The Story of a Trans Man, G. Andrews 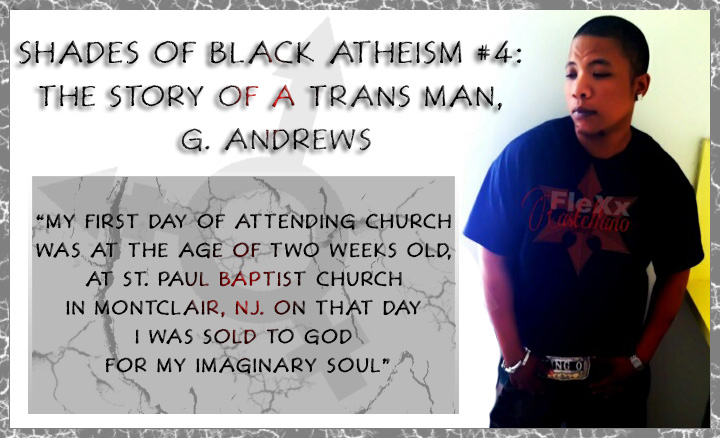 G. Andrews, also known as Flexx, is a 31-year-old trans man living in Miami, Florida. He* is the youngest child in his family and was the only one designated female at birth. His father’s side of the family is from Grenada, West Indies, and his mother’s side is multi-racial (French, Irish and African), hailing from Virginia.

When I asked him about his religious upbringing he stated, “My first day of attending church was at the age of two weeks old, at St. Paul Baptist Church in Montclair, NJ. On that day I was sold to god for my imaginary soul.” By age five, he had been exposed to various incarnations of Christianity as well as island ritual traditions. Still, he said that what he learned in the Baptist religious tradition eventually engulfed his entire thought process. As with the majority of black Americans, the Church was the center of activity in Flexx’s life. Growing up he went to Sunday school, choir rehearsal, and Wednesday night Bible studies. As his parents got older they became more and more dogmatic in their beliefs.

As Christianity a bigger part of his life, he found himself lost. All that he knew about life and his future was accessible only through “God.” Fortunately he was a good student and this helped counter his religious beliefs. At a young age he began to question the Bible logically and was a full-blown skeptic by age six. The Christian Creation story, along with Noah’s flood, were rejected after science classes where he was able to study evolution and geology (this is very similar to my own story except it wasn’t until college that I got to this point). Flexx said, “I couldn’t understand how an omnipotent, omnipresent, and omniscient ‘God’ would create his own adversary, and doom the world into chaos, out of love.” 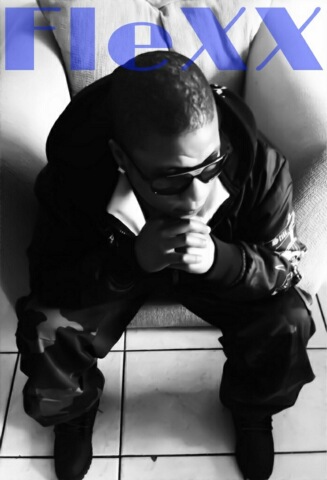 Flexx knew he felt like a boy and was attracted to girls at a very young age but he kept it all a secret — along with his growing disbelief in God and the Bible. “In the black community [open] atheism is scarce, just like homosexuality.” He felt that none of these parts of his reality fit in with how his family and the Church wanted him to be. As he grew up, he was barraged by attempts to indoctrinate him. In fact, most of his family members were pastors, ministers, evangelists, deacons, and trustees in the church. Speaking in tongues and feeling the “holy ghost” were daily occurrences. Casting out demons was a normal act. As his family took leadership roles in church, he was forced to follow. If he were to attempt a different course he was “rebuked in the name of Jesus’ blood” and forced to “repent.”

At the age of 17, he was ready to escape and enter the real world. He remembers watching so many Christians around him behave like “total hypocrites.” He’d see people issuing condemnations at the world, while having a closet full of skeletons at home. He does acknowledge that religions tend to contradict themselves with their hypocritical doctrines, so how else would the adherents act?

College, for Flexx, was freeing. This was the first time he was able to openly express his gender and attraction to women and accept himself as he is. He still wasn’t quite ready to fully give up on religion, though, especially since the church was more than just a place to pray, but also a meeting place for an array of activities. As the years passed, he’d still attend the occasional church service, but those were also the times when he felt the least amount of love. At 20 he even tried attending Greater Refuge Temple in Harlem, NY. However, the Pentecostal church was just as hypocritical. After a year he let organized religion go completely and was almost rid of his belief in God.

In 2010, one of Flexx’s brothers committed suicide. If there had been even a shred of God-belief still around, it completely disappeared that day. Still, he thirsted for knowledge and began a personal comparative religious expedition. It was around this time that he met a “beautiful thinking woman” named Danyelle. Danyelle declared herself an atheist and that emboldened Flexx. He said, “As we began to date, even until today, I am grateful to have someone in my life who understands me.” He began to study the origins of Christianity and many other world religions with Danyelle. He also began to study the mythology of Christ, Mithraism, Greek mythology and ancient Egypt along with the works of Charles Darwin, Christopher Hitchens, and Richard Dawkins. He re-learned how the universe started and became enraptured by NOVA episodes on cosmology and the evolution of man.

Now, in his thirties, he is proud to say he is an atheist. His family still practices religion and tries to push it back on him and he accepts that they always will. Nevertheless, the love flows both ways despite their differences.

I asked Flexx if he feels there is a need for diversity groups within the movement. He stated, “There is a need for skeptic groups, discussions panels, and workshops for more minority individuals. I am willing to participate in any way I can to help others learn the truth. Equality in every aspect of life is what the human race needs to survive [and] every race has their own culture and each adapts to atheism differently.” Flexx is a chef by trade and he identifies as an atheist, trans man with a mixed racial background. “This forces me to represent equality for all humans and make sure their voices are heard.”

*Flexx doesn’t usually identify as either gender and considers himself a third gender. However, the pronoun “he” is most often used.

January 22, 2013
I Guess They're Called Him-nals for a Reason
Next Post