At Urging of Humanist Groups, UK Air Cadets Will Soon Be Able to Recite a Godless Oath January 22, 2013 Hemant Mehta

At Urging of Humanist Groups, UK Air Cadets Will Soon Be Able to Recite a Godless Oath

If you want to join the Air Cadet Organisation (in the UK), you will have to say this oath at your graduation ceremony:

I, Cadet [Full Name], hereby solemnly promise on my honour to serve my Unit loyally and to be faithful to my obligations as a member of the Air Training Corps. I further promise to be a good citizen and to do my duty to God and the Queen, my Country and my Flag. 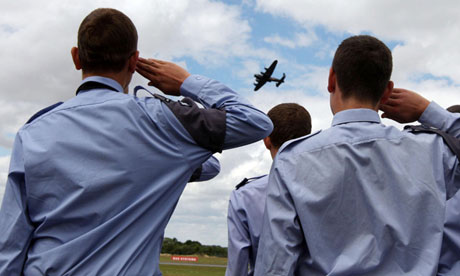 One of the UK’s largest and most respected youth organisations will no longer compel its new members to take a religious oath.

… the Air Cadet Organisation, which was formed in 1938 and played a key role in the second world war, [will] offer future cadets the option of a non-religious oath.

Both of the Humanist organizations are thrilled — and they have a right to be; they’ve earned it:

UKAFHA General Secretary David Brittain, welcoming the news, said: ‘The Air Training Corps is a significant youth organisation with 35,000 young people across the UK involved in its 1009 squadrons. According to repeated surveys 65% or more of teenagers state they are not religious, and by failing to provide a non-religious oath the organisation has excluded a significant number of young people of good conscience who do not believe in any god and are not willing to lie by saying words they don’t believe.

‘While we welcome this news from the ATC there is still work to be done in ensuring that all Ministry of Defence sponsored youth organisations provide a similar promise. To not offer an alternative to the religious promises is divisive, unfair, and deeply sad.’

BHA Chief Executive Andrew Copson also welcomed the news, saying, ‘British society is changing dramatically: over two-thirds of young people have a non-religious identity and that proportion is growing all the time. The institutions of our society need to catch up with this demographic fact if they are going to remain relevant and build cohesion between young people of different beliefs. As well as supporting armed forces humanists in ensuring that forces youth organisations do not discriminate, we are engaging directly with both the Scouts and Guides on this issue and hope for progressive change on every front.’

As you might expect, local Christian leaders are freaking out:

… “I’d like to see everyone following Christ and taking the pledge,” said a spokesman for the Soldiers’ and Airmen’s Scripture Readers Association. “I can’t see a truly Christian organisation dropping a pledge to Christ. It’s a hollow pledge if they don’t believe the words they are saying. You can’t tell people what to believe.”

Andy Tilsley, a spokesman for ChristChurch London, said the decision raised broader questions. “Should we change the words of the national anthem because they include ‘God save our gracious Queen’? What are people threatened by?”

I didn’t know the Air Cadet Organisation was a Christian group. Based on their website, neither did they.

What the complaining Christians don’t get is that this isn’t about being threatened or offended. This is about not wanting to lie when you’re serving your country. There’s no reason atheists should be barred from joining the Air Cadet Organisation and the oath was a theoretical barrier. Now, there’s at least an alternative. The original oath will not be changed — there will just be an alternative for those who wish to use it.