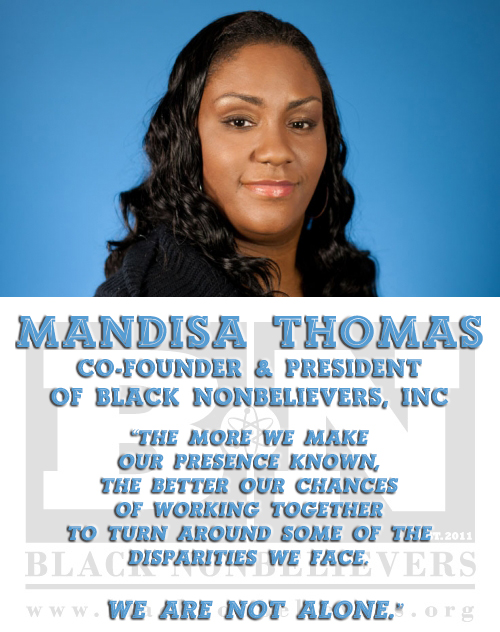 Mandisa Thomas is one of the co-founders and current President of Black Nonbelievers, Inc. The mission of this organization is fourfold: to provide secular fellowship, to nurture and support nonbelievers in coming out, to promote atheist pride, and to organize nonbelievers for charitable causes.

Born and raised in New York City but currently residing in Atlanta, Georgia, Mandisa was never formally indoctrinated into religious belief, although raised Black Nationalist. She stated that their core concepts were “a focus on issues in the Black community, learning about Black (and some African) history and culture, and alternative health practices of a natural derivative.”

Mandisa’s family is well aware that she is an atheist (it’s part of the reason she was comfortable being featured on the atheist billboard seen above). This includes her black atheist husband. She admitted that the only one person she hasn’t fully discussed her disbelief in God with is her paternal grandmother, a staunch believer and is someone well into her 80s. Mandisa said she just doesn’t have it in her to debate the subject with her, but she’s fairly certain that her atheism is known to her grandmother.

Although not raised in a strict religious tradition, Mandisa stated the following:

The black atheist experience is indeed different from non-Blacks because belief in God has become such a fixation in the Black community. Even if folks don’t attend church, they still believe in some sort of deity, and assume that the rest of us do as well. And if we disclose that we do not believe at all, it is seen as a form of betrayal to the race.

This has certainly been my experience. It has resulted in much personal trepidation when it comes to telling other black folks that I am an atheist. 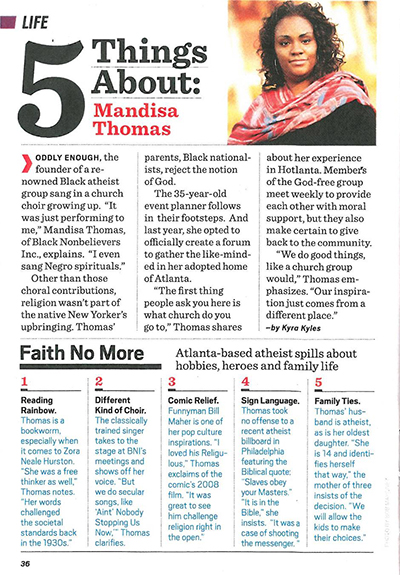 Fortunately, this hasn’t held Mandisa back. She was featured in the April 30th, 2012 issue of JET Magazine (see above image), been a guest speaker for such organizations as the Secular Humanists of the Low Country, Humanists of Florida, and American Atheists, and she spoke at the first annual Florida Secular Rally. She has also been a guest on podcasts including: The Critical Eye, Ask an Atheist, and the Black Freethinkers Blogtalk Radio Show. As the president of Black Nonbelievers, Inc., Mandisa works to encourage more blacks to come out and stand strong with their nonbelief in the face of such strong religious overtones. “The more we make our presence known, the better our chances of working together to turn around some of the disparities we face. We are NOT alone.”

I asked Mandisa why she was the president of a race-focused atheist group:

… because we can better address and support each other when the face looks more like us. As much as we would like to think the issue of race relations is a thing of the past, it is not. Very much like examples in public health when Black nurses and practitioners had to be the ones to go into Black neighborhoods to gain the trust of the people in order to facilitate better health care, the same must be done in order to help bring out more atheists of color — and we will do this the best way WE know how.

To other black atheists, Mandisa had the following words of encouragement:

We will not make any progress if you stay silent about your nonbelief. It may seem as if the number of atheists in the Black community are small, but they are growing. There are now a number of support groups (including those focusing on Blacks) that are valuable resources, so you are by no means alone with any struggles you may have.

January 15, 2013
Prometheus Books is Partnering Up with Random House Publisher Services
Next Post