High School Teacher Sues Her District After They Tell Her to Stop Proselytizing to Students January 11, 2013 Hemant Mehta

Joelle Silver, a science teacher in the Cheektowaga Central School District in New York who also doubles as the faculty sponsor for the school’s Bible Study Club, has no idea where to draw the line between being a public school teacher and being a representative of her church. 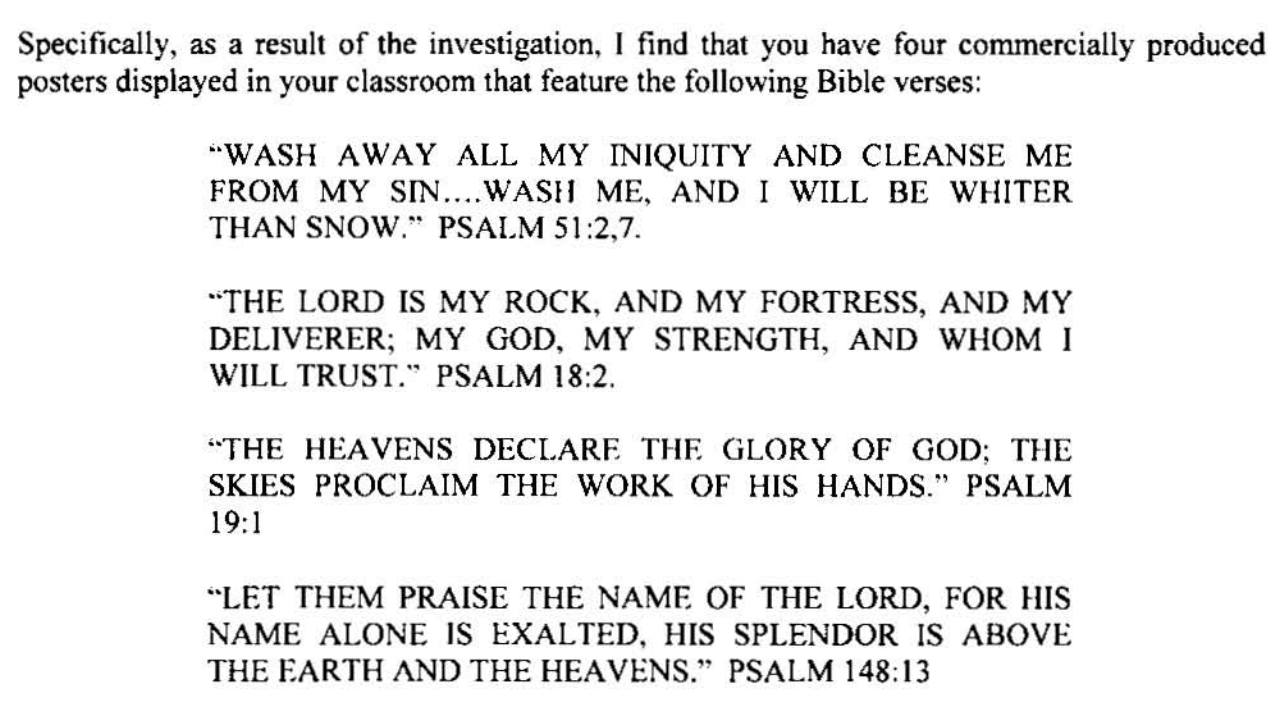 Prompted by a student’s complaint to the Freedom From Religion Foundation, here’s a portion of a letter (PDF) Silver recently received from her superintendent:

… the District received a complaint letter from the Freedom from Religion Foundation (‘FFRF”), dated June 7. 2012, concerning your classroom. I arranged for you to be provided with a copy of the complaint letter shonty after I received it. I also initiated an investigation into the allegations contained in the FFRF’s June 7th letter, which was carried out by my administrators. That investigation confirmed a substantial number of the allegations made by FFRF.

You’ll want to sit down for this…:

Silver also invited Dr. Luther Robinson, MD to speak to her Anatomy & Physiology class last spring and his slides included two with Bible verses on them — something Silver would have known about since she told the school she reviewed his materials in advance.

Oh, that’s not all. A follow-up letter from FFRF indicated Silver tried to guilt-trip the student who ratted on her:

The student also said that Silver told students in the anatomy class that whoever had reported her to the Freedom From Religion Foundation lacked integrity and character and was akin to someone who had cheated on the final exam, [FFRF attorney Rebecca] Markert wrote in her follow-up letter.

(Can you imagine what the response would have been like if Silver were Muslim, with Koran verses lining her walls? Or an atheist, with quotations from Christopher Hitchens greeting students each day? It’s only in situations like these, with a Christian proselytizer, that we even have to debate whether or not this should be allowed.)

I think Kane was being incredibly generous by only giving her a warning. She broke so many rules, it’s a wonder she still has a job.

It all leads to one question: How on earth is Silver a science teacher? How did Silver respond to the overwhelming amount of evidence showing her promoting Christianity to her students?

Then, she filed a federal lawsuit against the district (PDF) with the help of the American Freedom Law Center.

In summary, she knows what she’s doing is wrong, but she’s going to argue that other teachers do it, too… even though that’s not actually true. The district isn’t anti-Christian; they’re anti-getting-sued. They’re asking of Silver the same things they would ask of anyone else promoting their faith on the taxpayer’s dime.

But Silver thinks she’s being persecuted (because, you know, Christians have it *so* rough):

No one died so that Silver could preach to students who have no choice in the matter.

You don’t need a judge to decide this matter. All you need to do is ask a fifth-grader who read page one of the Constitution.