The Portrait of Jesus at Jackson Middle School Must Come Down January 8, 2013 Hemant Mehta

The Portrait of Jesus at Jackson Middle School Must Come Down

At the high school I work at, we have a lot of pictures of students up on the walls. We celebrate the students who excel in Science, Art, English, Music, Athletics, Theater, etc.

At Jackson Middle School in Jackson, Ohio, they have this portrait instead:

Believe it or not, that’s not a student. (I know! I couldn’t believe it either!)

The Freedom From Religion Foundation, responding to a complaint it received, wants the portrait taken down:

[FFRF attorney Rebecca] Markert goes on to cite numerous case files in her letter to [Superintendent Phil] Howard. “It is illegal for Jackson Middle School to post religious images on the wall of its school,” Markert wrote. “If true, the District must remove the picture of Jesus at once. We ask that you commence an immediate investigation into the allegation and take the appropriate and necessary steps to bring Jackson Middle School into compliance with the Constitution. Please respond in writing so that we may assure our complaintant, members, and those following the situation that the district has not impermissibly endorsed religion,” the letter stated.

Howard also stated that the picture hangs in the Wall of Honor portion of the school and that there are many other pictures on display in that entranceway of people who have had an impact in the district over the years.

So is the portrait an illegal promotion of religion? FFRF thinks so (PDF). They argue that anyone who saw the picture would reasonably think the school was promoting Christianity.

If a large portrait of Jesus were to hang in Jackson Middle School, an objective observer would have no doubt that it had the district’s stamp of approval.

“I, personally, don’t believe we are in violation of the Constitution,” Superintendent Howard said. “That picture was donated or presented to the district by Hi-Y Club students and has been hanging in that building since 1947. I have done some research, and because it was a student led presentation, it is permissible as far as I am concerned,” Howard explained.

Typical Christian responses: “The students did it!” “It’s tradition!” “Why do you hate freedom?!”

Also, the “Hi-Y Club,” in case you’ve never heard of it before, is a group affiliated with the Young Men’s Christian Association (YMCA). It’s not like we’re talking about a neutral group here.

There’s no reason to think the school will get away with this. They can just leave the Jesus picture up and wait for the lawsuit to come — they’ll lose, it’ll cost them money, and the students are the ones who’ll be hurt in the process — or they can do the responsible thing and take it down right now since it shouldn’t be up there in the first place. (For what it’s worth, it may have been legal to put it up in 1947, but court cases since then have said otherwise.)

It’s funny the superintendent says he’s “done some research” into this because you would think he would’ve come across the recent case of another religious symbol at a high school that got taken down: The banner in Cranston High School West that Jessica Ahlquist helped bring down. That banner was also put up by students — the first graduating class in 1963 gave it to the school as a gift — and the religious words were written by a member of the student council. As we all know by now, a U.S. District Court judge ruled that display unconstitutional because it was an illegal promotion of religion.

By the way, go back to that statement by Superintendent Howard for a moment:

If you watch that video embedded above, you might have seen this screenshot from it: 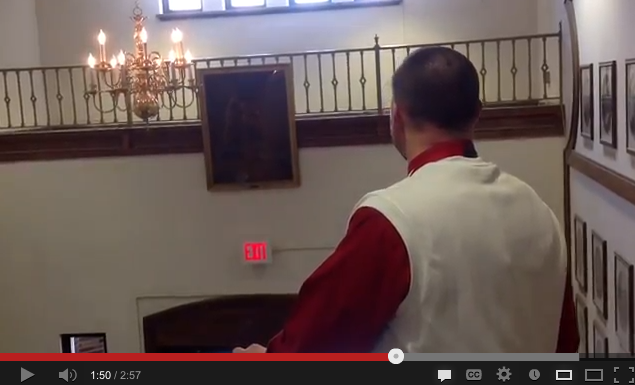 That’s hardly Jesus among many other portraits. That’s Jesus with some pretty sweet real estate, away from his neighbors, in a place of prominence.

This is promotion of one religion over all others.

January 8, 2013
Sam Harris Responds to Critiques of His Gun Article
Next Post

January 8, 2013 Shades of Black Atheism #2: Ian Cromwell
Browse Our Archives
What Are Your Thoughts?leave a comment