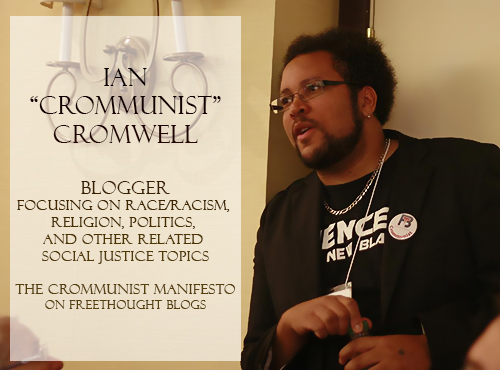 Ian Cromwell is mostly known for his blog The Crommunist Manifesto at Freethought Blogs. He focuses on topics including race/racism, religion, politics, and a number of other related social justice topics. He occasionally speaks publicly on the same topics and would gladly speak or sit as a panelist at up-coming conferences and conventions.

Twenty-eight years old and living in Vancouver, British Columbia, Ian was raised as a Roman Catholic by a father who is a former priest from Guyana (a small South-American former British colony). His mother was an Irish/German Canadian convert to Roman Catholicism, but his family was what he described as “averagely religious,” attending church on a weekly basis. Ian went to Sunday school as well. The family celebrated the major religious holidays, but their “lives were not suffused with gods.” Perhaps it is for that reason that Ian’s being an atheist has not affected his relationship with his family. He stated, “I live very far away from them, which means that my day-to-day life is fairly off their radar, and vice versa. When we are together, we focus more on spending time with each other than on things that we disagree on.”

When asked if he felt the Black atheist experience is different from that of non-Black atheists, he made the following comment:

“The black experience of just about anything is different, in some ways, from the non-black experience. Race is a part of how we interact with the world, and our histories affect our outlook. In my experience, there are many parts of the white atheist experience that are very similar to my own, but I can’t generalize much beyond that. My own upbringing was probably more similar to that of my white friends than my black friends, which I’m sure plays a role.”

So are race-focused groups necessary in the secular community? Ian felt, as I do, that that community benefits from a diversity of perspectives, racial and otherwise. He went on to say that “whatever we have been doing up until now has given us a pretty monochromatic group. It’s time for us to branch out, and if race-focused groups are part of that, I’d support them.” His personal focus is less on organizing and recruiting non-whites and more on “helping facilitate informed discussion on race as part of the general skeptical discussion.”

Since Ian resides in Canada, his experience is another excellent example that all Black atheists have different perspectives and experiences to share. We have some commonalities, of course, but Ian added:

“Canada is nowhere near as overtly religious as the United States is. There are also far fewer black people, most of whom are Caribbean rather than the descendants of Canadian slaves. As a result, the “black experience” in Canada, while it is informed by the American experience, is different in many meaningful ways. I have never in my life lived in a social circumstance that wasn’t majority-white, which means I’m probably the worst person to ask about what the ‘typical’ black Canadian is like.”

His advice for black atheists: Get on Twitter, Facebook, etc. Find other black atheists out there. Find support where you can, even if that support is virtual. You are not alone.

January 8, 2013
The Portrait of Jesus at Jackson Middle School Must Come Down
Next Post

January 8, 2013 Christian News Site Thinks Neil Patrick Harris Is Going To Get His Gay All Over The Super Bowl
Browse Our Archives
What Are Your Thoughts?leave a comment