Every so often, I have to edit/update a piece on this site that has already been posted. If it’s an insignificant change (like a spelling mistake), I just go ahead and change it. If it’s something more significant, I will put an update on the post explaining what I did. It just seems like proper blogging etiquette.

Not everyone does that, though. In fact, Rev. Austin Miles at The Christian Post appears to have made a major change to a piece he wrote, failed to explain that change to his readers, denied ever doing such a thing after being confronted about it, and then blamed his accuser for bringing it up in the first place.

In his latest piece, he talks about how atheists “bully” Christians online, wearing them down by — I’m not making this up — “waterboarding [Christians] with words.”

If you read Miles’ piece when it originally went up on Saturday, you would have seen him talking about Michael Newdow, who tried to get “Under God” out of the Pledge of Allegiance: 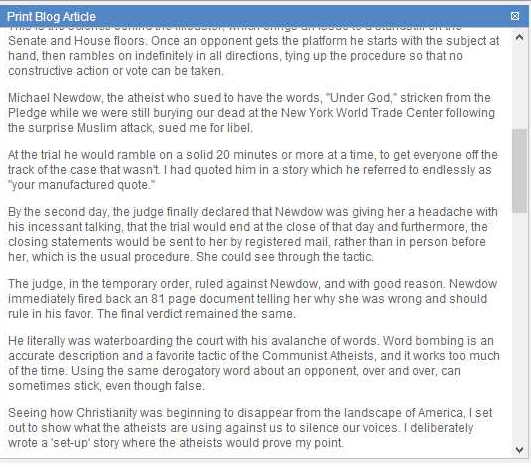 Take note of the phrase in the second to last paragraph there: “He literally was waterboarding the court with his avalanche of words.” It’s pretty much the worst possible way to use the word “literally,” since what you mean is the exact opposite. I guess Miles does that often.

But if you look at the latest version of his piece, the whole section about Newdow, including that phrase, is nowhere to be found (check the top two paragraphs): 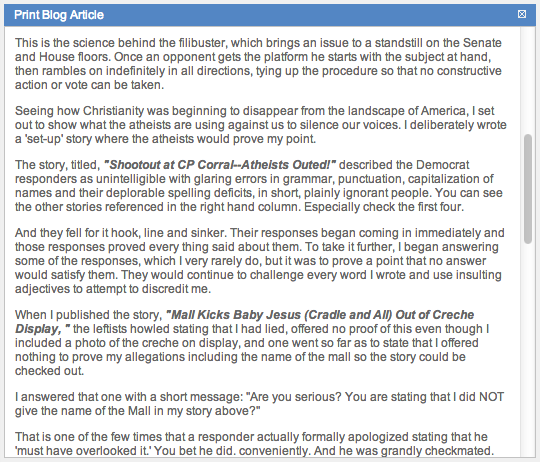 What happened? Maybe Miles found a mistake in his original piece and chose to remove it. Maybe Miles just thought “Communist Atheists” was an unfair accusation and didn’t want it in his piece. Whatever it was, he just removed the section-in-question without letting people know he did it.

I think we now know why he did it, though. And we owe that to some eagle-eyed atheist readers of the Christian Post website.

Brian Westley harped about the misuse of “literally” in a comment on the post (and made reference to another one of Miles’ statement):

Love that: “You are literally a terrible writer” 🙂

So what did Miles do in response? He denied ever saying such a thing! He accused Westley of making the whole thing up despite the proof to the contrary. In fact, it seems like Miles deleted the whole section from the piece after reading Westley’s comments (just note the timestamps of Westley’s comment, the Google Cache of the original article, and Miles’ comment). 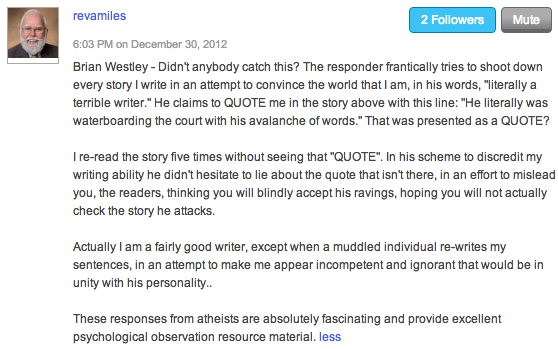 I re-read the story five times without seeing that “QUOTE”. In his scheme to discredit my writing ability he didn’t hesitate to lie about the quote that isn’t there, in an effort to mislead you, the readers, thinking you will blindly accept his ravings, hoping you will not actually check the story he attacks.

I know we’re not talking about a major issue here. We’re just talking about a silly word. But I’m amazed at the audacity of a “man of God” who lies in the face of such clear evidence against him. Instead of admitting he wrote the phrase in question, he deleted it, and then cast the blame on an atheist for accusing him of doing it in the first place.

December 31, 2012
Is Believing in Hell More Traumatic Than Being Physically Abused?
Next Post