A Mobile Nativity Scene is Illegally Parked Outside City Property and Officials Are Letting It Slide December 28, 2012 Hemant Mehta

The Ellwood City Municipal Building in Pennsylvania has played host to a couple big church/state controversies since last year. In 2010, officials allowed a Nativity Scene — and nothing else — to be displayed inside the building. The Freedom From Religion Foundation rightfully argued that was illegal and requested to put up their own display in 2011, a request that was granted. That led to this banner going up alongside displays from other religious faiths: 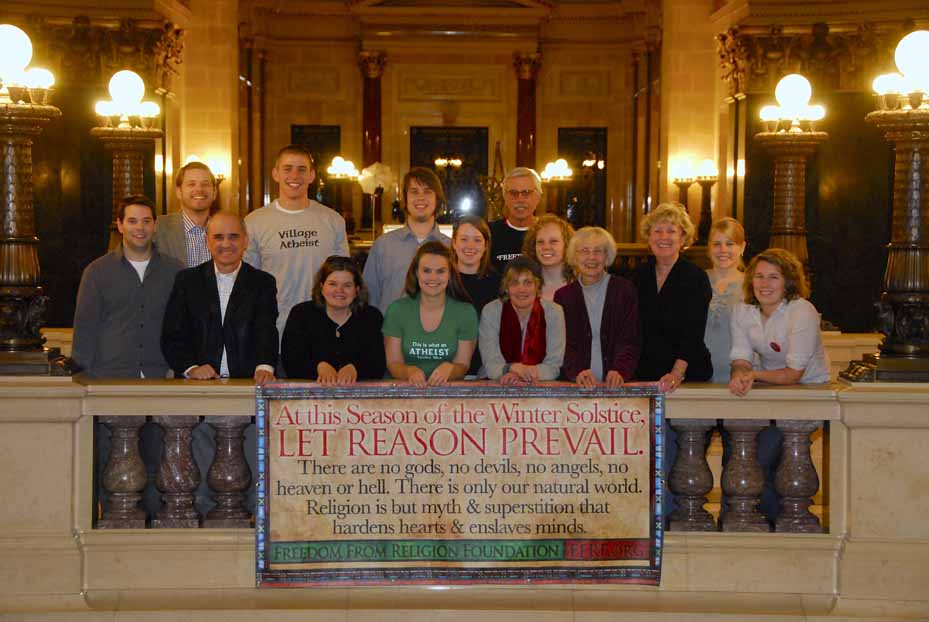 So this past year, the Borough council attempted to institute a lottery to prevent the free-for-all. They would let anyone apply to put up a display… because they figured they knew how it would turn out:

“My fear is that somebody is going to be picked in the lottery and not put up the Nativity,” [Ellwood City Nativity Placement Committee chairwoman Marisa Bunney] said.

Somehow, DeCarbo turned out to be the decisive “No” vote in a 4-3 decision against the lottery. Maybe he feared atheists would “game” the system by fairly applying for more displays than Christians…

That brings us to today.

The current policy in Ellwood City — and it’s a good policy — is that no holiday displays are allowed on the premises at all, including Nativity scenes.

But local resident and Moose Lodge member Mike Parisi thought he found a loophole in the rules. Instead of bringing a Nativity scene inside the building, why not just put one on a trailer attached to a truck and park it outside the building? In fact, since you’re allowed to park in one spot for two hours, why not stay put for a couple of hours, then move down to the next spot? It would be completely legal. 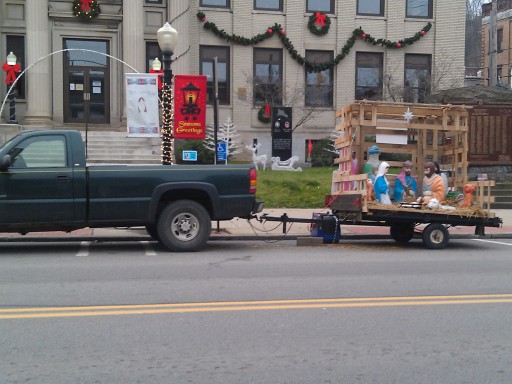 Since Dec 6th, it has remained in front of city hall without getting ticketed, towed, or moving on down the road.

In other words, the truck is just camped out in front of City Hall… with no penalty whatsoever being issued to Parisi.

FFRF is on it (PDF). They want copies of the “policies, codes, ordinances, resolutions, or similar records that regulate parking in front of the Ellwood City municipal building” so they can get documentation that city officials are selectively choosing not to enforce their own rules against the Christian driver:

If the Borough’s ordinances are unenforced against this display, Ellwood City is demonstrating its preference and endorsement of a sectarian religious message. Selective enforcement of neutral parking regulations poses a serious constitutional problem.

It’s just another example of city officials breaking the law in order to promote Christianity. No other religious or non-religious group ever gets that sort of treatment — and no other group wants that. All FFRF is asking for is for the city officials to follow its own laws: Don’t give one group special treatment just because its members pray to the same imaginary God as you.

By the way, the trailer carrying the mobile Nativity scene has a sign on it containing a pretty obvious spelling error. You can see it here.

December 27, 2012
Catholic Priest Wants to Work Together for Newtown; Edward Tarte Responds and is Met with Silence
Next Post