Atheist Banner in Pennsylvania Taken Down and Replaced with an American Flag December 20, 2012 Hemant Mehta

At this Season of the Winter Solstice, LET REASON PREVAIL. There are not gods, no devils, no angels, no heaven or hell. There is only our natural world. Religion is but myth & superstition that hardens hearts and enslaves minds.

It was allowed there because a large menorah and a Nativity scene were already on the government property and forbidding the atheists from putting up a display would have been illegal. As you can see in the picture below, though, it was hung pretty high up in the air (maybe so it wouldn’t hurt the innocent eyes of anyone walking by the religious symbols…?):

As of today, though, the banner has been cut down. It’s been replaced with an American flag: 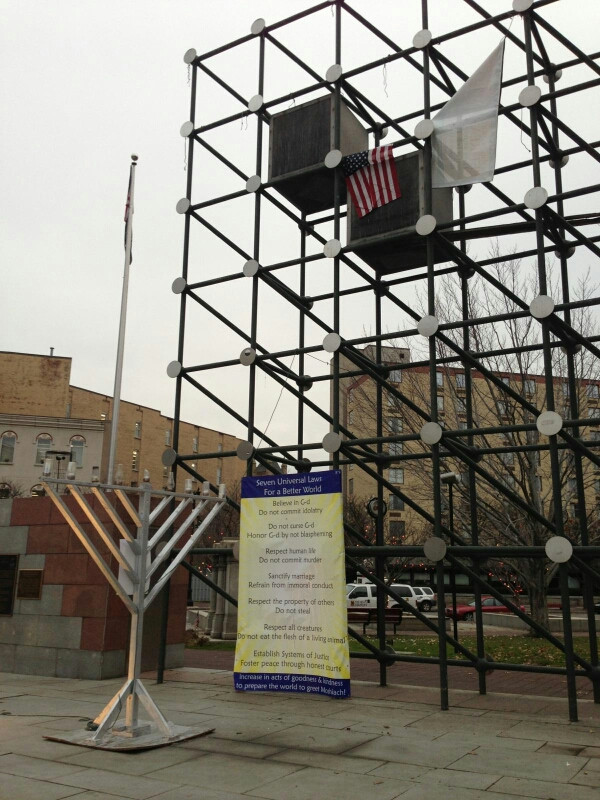 How the hell did anyone do that…? And how did they not get noticed?! It hardly happened by accident. Justin explains:

It appears that someone had cut or loosened the strings holding the left side of the banner and (curiously enough) placed an American flag which was previously not there… [It does not appear to be the case that the strings holding the banner were simply loosened on their own considering they were quite taut and an American flag is now placed there.]

No word yet on whether the banner will be put back up there.

Whoever did this seems to be implying that atheists are un-American… which is news to me and, I’m sure, all of you (not to mention all those atheists serving in the military).

I hope the flag stays there. Let’s just put the banner up next to it. That’s a message I can get behind. We’re just as American as everyone else.

***Update***: And we have a winner loser. Someone has already confessed to the crime — and there’s video of him doing it:

Shortly before 4 p.m. Thursday, a man who identified himself as Joe McDonald climbed about 30 feet up the sculpture, cut two wires holding one end of the banner, and left it dangling in the wind alongside an American flag that he had placed on the scaffolding.

“I just think in the light of the elementary school massacre in Connecticut, that we shouldn’t be divided as a country over petty stuff like is there a God or isn’t there a God,” said McDonald. “If they wanted to put the sign down here with us, that’s fine because we’re united. But to put it above everybody? No, it’s symbolic.”

How many batshit crazy things can you say in one sentence…? There was a tragedy in another state, so we should just let religious displays run wild.

McDonald says he’d be ok with the atheist sign on the ground? Great! When he runs the city, he can make that decision. Until then, we have no need for third-rate vigilantes cutting down the sign and destroying someone else’s property.

Joe: abridging others’ freedom of speech and vandalizing property because you feel a message is inappropriate is not an appropriate response. If you don’t like the message, feel free to, like I did, bring a banner to City Hall with fifty dollars and have it placed.

Why didn’t you vandalize the Jewish banner instead of mine or even prior to the FFRF banner being erected? The Jewish banner seems to assert that belief in God makes for a better world. Why don’t you see religious messages to be divisive? Why don’t you petition your government to allow no banners? I don’t buy your line of reasoning.

The banner was put at a high elevation by city workers. I was asked if the placement was fine and I agreed because of people like you — people who would rather abridge others’ speech, vandalize, and cry offense rather than to have a civil discussion and respond with a lawful message in kind.

Your actions are not honorable. Thanks for admitting to your criminal activity and setting a poor example for the people whom you may represent.

December 20, 2012
Alber Saber Talks to the Press: 'They Picked a Good Moment to Target Me'
Next Post